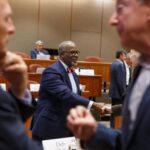 In landmark action to signal a renewed commitment to civil and effective government, freshman members of Congress have issued a statement prompted by the Harvard Kennedy School’s Institute of Politics (IOP) Bipartisan Program for Newly Elected Members of Congress promising an effort toward collaboration and cooperation in solving the issues facing the nation.

The 13 Republicans and 19 Democrats attending the IOP program held last week halted a panel on “Making this a Reform Congress” to caucus and discuss how to work across party lines. Their statement is available here.

“We at the IOP hope to support this extraordinary freshman class’s commitment by arranging to work with these members next year and to bring them together for follow-up programs. Their unprecedented statement deserves encouragement from all Americans,” said Bill Delahunt, Interim Director of the IOP.

In 2016, the biennial program was held Dec. 6–8 in collaboration with the American Enterprise Institute (AEI), the Center for Strategic and International Studies (CSIS) and Congressional Institute. The program is nationally recognized as the preeminent educational and preparatory program for newly elected Republican and Democratic Members of the House of Representatives. More than 700 current and former representatives from both parties have attended the program since its inception in 1972.