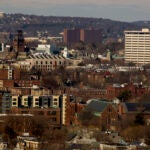 “We are happy to welcome yet another class of scholars and artists engaged in timely and exciting work,” said Gates. “Images of the Black in Latin America and the Caribbean, political rap music and racial attitudes, Black women’s root-working traditions, Black mariners and eighteenth-century slavery, a novel about 9th Cavalry Buffalo soldiers, Ancient Egypt and race in visual culture, the origins of convict leasing, the gender politics of Black publishing, and Caribbean youth and police surveillance are among the extraordinary, important projects which the incoming fellows will be pursuing and presenting at the W. E. B Du Bois Research Institute, housed in the Hutchins Center.”

The 2018–19 W. E. B. Du Bois Research Institute Fellows and their projects are as follows: