How to talk to a climate skeptic 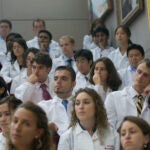 If you’re talking to a person who’s skeptical about climate change, should you argue with them about scientific evidence?

Maybe not, says Aaron Bernstein, co-director of the Center for Climate, Health, and the Global Environment (C-CHANGE) at Harvard T.H. Chan School of Public Health. It may be more productive to talk with them about a climate-related topic that they think is important — such as economic opportunity or energy independence.

At a Feb. 27 workshop at Harvard Chan School, Bernstein outlined the reasons that some people are skeptical about climate change — which may have little to do with the science — and offered suggestions on how to have productive conversations about the hot-button topic.

“So if you’re talking to a climate skeptic and they come at you with ‘the science is bad,’ it may not make sense to attack them on that point, because what that may be a manifestation of is a deep-seated concern that the government is going to take over their lives,” Bernstein said.

Bernstein had three main pieces of advice for talking with a climate skeptic:

Know your goal. Do you want to get the person to vote? To support a new kind of energy policy? It may be a better strategy to focus on a specific goal than trying to convince them about some sort of scientific evidence — for example, that satellite data about climate change proves that it’s really happening.

Know your audience. Learn more about a person’s affiliations, such as their synagogue or church or employer or social groups — before launching into a climate change debate. The more you know about who you’re talking to, and what they care about, the better the conversation may go.

Frame the conversation around shared values. Rather than debating a topic such as whether or not climate change is caused by humans, try talking about how switching to solar or wind power could help the U.S. be energy independent, because fossil fuels are a finite resource. Or, if someone lives near coal plants, try discussing how cleaner energy sources could mean cleaner air for that person’s community or jobs in new clean energy industries.

“Above all,” said Bernstein, “be empathic and find common ground.”