How Hurricane Maria led to U.S. shortage of IV bags 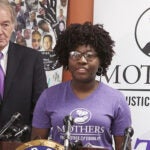 U.S. hospitals are facing widespread shortages of IV bags in the wake of Hurricane Maria, which damaged and temporarily shut down several Puerto Rico factories owned by a major manufacturer of the bags.

IV bags, used to mix and deliver liquid medications or salt water to patients through an intravenous line, are one of the most highly used items in hospitals. There are workarounds to deal with the lack of the bags, such as injecting medications with a syringe. But experts from Harvard T.H. Chan School of Public Health are concerned that the lack of bags could negatively affect patient care.

Paul Biddinger, director of Harvard Chan School’s Emergency Preparedness and Response Exercise Program and chief of the Division of Emergency Preparedness at Massachusetts General Hospital, said in a Feb. 20, 2018 article in The American Prospect that he’s worried about cardiology patients, who use blood thinners and anti-arrhythmic drugs, which are often injected via an IV bag.