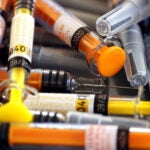 Because data on jails is limited — even though they confine nearly one-third of incarcerated people, this study is one of the first to document similarly high rates in jails. The data is available for Massachusetts because of a court order from a case asking the State Supreme Judicial Court to limit the spread of COVID-19 by reducing the number of people incarcerated.

The study also found that facilities with higher testing rates had higher case rates, but attributed this to the relatively low rate of testing in county facilities.

According to the study, facilities with higher decarceration rates had lower case rates. The authors observed “a gradual decline in reported cases among incarcerated individuals and staff, corresponding to a decrease of 15 percent in the incarcerated population.” Staff in correctional facilities are also at high risk of contracting COVID-19.

As of July 8, state prisons and county jails were reporting 1,032 confirmed cases of COVID-19, with 664 cases among incarcerated individuals and 368 cases among staff. The authors mention the following limitations in the data: the absence of deaths, lack of demographic characteristics, and lack of information about staff and COVID-19 to be able to calculate testing and case rates over time.

The authors urge immediate action to stem the “alarmingly high” rate of COVID-19 in carceral facilities in the state. They recommend testing without coercion, decarceration, and contact tracing.

Monik C. Jiménez, lead author, also sees the need to understand the experiences of people incarcerated during COVID-19 and the conditions of their confinement. In partnership with community advocacy groups, she and the team have created a survey to document conditions and raise the voices of those in confinement.

Jiménez, Tori L. Cowger, Lisa E. Simon, Maya Behn, Nicole Cassarino, and Mary T. Bassett coauthored the study, which JAMA Network Open published as a research letter on August 21. Bassett is director of the FXB Center for Health and Human Rights at Harvard University. Faculty from the FXB Center, along with other public health experts, has previously discussed the difficulty of physical distancing in detention and the danger that COVID-19 represents to congregate facilities.