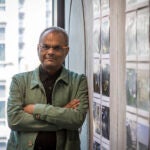 Hanif Kara recognized with Order of the British Empire Award

The Damon Runyon Cancer Research Foundation has announced ten recipients of the 2022 Damon Runyon-Rachleff Innovation Award, established to support “high-risk, high-reward” ideas with the potential to significantly impact the prevention, diagnosis, or treatment of cancer. Five initial grants of $400,000 over two years have been awarded to six extraordinary early-career researchers (four individuals and one collaborative team), each of whom will have the opportunity to receive two additional years of funding (for a total of $800,000). This year, “Stage 2” continuation support was granted to four Innovators who demonstrated significant progress on their proposed research during the first two years of the award. Among the winners are three members of the Harvard community and its affiliates.

The Innovation Award is designed to provide funding to exceptionally creative thinkers with a revolutionary idea who lack sufficient preliminary data to obtain traditional funding. The awardees are selected through a highly competitive and rigorous process by a scientific committee comprised of leading cancer researchers with their own history of innovative work. Only those scientists with a clear vision and passion for curing cancer are selected to receive the prestigious award.

Examples of past accomplishments made by Damon Runyon-Rachleff Innovators include the development of the gene editing technology CRISPR and single-cell sequencing techniques that have revolutionized not only cancer research but biomedical sciences globally.

This program was established thanks to the generosity of Andy and Debbie Rachleff.

Cancer cells rely on efficient uptake, conversion, and exchange of nutrients and vitamins to support their rapid growth and survival. The molecular transport channels that allow passage of nutrients between the different cellular compartments are critical for the survival of cancer cells and are thus promising as potential drug targets. However, drug discovery efforts are hampered by a lack of basic understanding of these channels’ identities, functions, and regulation inside cancer cells. Dr. Kory’s research aims to identify transporters central to cancer cell nutrient supply and detoxification pathways and determine their role in the emergence, survival, and aggressiveness of cancer. Her research is relevant to all cancers, but particularly pediatric, blood, and breast cancers.

Epidemiologic studies have revealed that many cancer types display differences in incidence or outcomes between the sexes. In most cases, these differences are only partially explained by non-genetic factors such as hormonal differences, carcinogen exposure, lifestyle, and access to health care. Our understanding of how genetic factors contribute to differences in cancer incidence between the sexes remains incomplete. A fundamental genetic difference between the sexes is in chromosome composition. Relative to male somatic cells, female somatic cells have an extra X chromosome. Most genes on the second copy of chromosome X in females are inactivated via a process known as X-chromosome inactivation, which approximately equalizes the dosage of X-linked genes between males and females. Dr. Viswanathan’s project tests the hypothesis that genetic alterations to the X chromosome in cancer may perturb this carefully regulated process and thereby contribute to differences in cancer incidence or pathogenic mechanisms between males and females.

DNA methyltransferase enzymes, responsible for adding methyl groups to DNA strands, are critical for controlling gene expression. These enzymes are often disrupted in cancers, including acute myeloid leukemia (AML), but their regulation is not understood. One form of enzyme regulation, called allostery, involves a regulator molecule binding to an enzyme at a site other than its active site. Dr. Liau is pioneering approaches to explore allostery, specifically focusing on allosteric mechanisms that regulate DNA methyltransferase function. His research will shed light on the impact of cancer mutations on enzyme function and strategies to pharmacologically modulate their activity. The approaches developed will be broadly expanded to study other enzymes disrupted in cancer and leveraged with synthetic chemistry to enable therapeutics discovery.