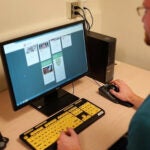 The scholarships support one year of master’s study at Churchill College in the University of Cambridge, covering full tuition and travel costs while also proving a stipend and opportunity to apply for a special research grant.

“Many Churchill Scholars describe their year in Cambridge as the best year of their lives,” according to a release from the Churchill Scholarship organization. “What makes the experience so exceptional is the unique opportunity to focus on independent research, the welcoming and non-hierarchical culture of Cambridge labs, the emphasis on work- life balance, and the rich environment for personal growth that Cambridge provides.”

Sumathipala, an undergraduate researcher at Harvard Medical School, is a former preprofessional figure skater who after suffering a concussion became interested in neuroscience. She began working at Johns Hopkins School of Medicine at 14 and three years later created Theraplexus, a computational platform that uses network science analytics and artificial intelligence to map molecular interactions and provide better drugs for chronic diseases like cancer, Alzheimer’s, diabetes, and heart disease. With he scholarship, she plans on applying some of the techniques she’s developed during her undergraduate research to artificially grown tissues called organoids to study what causes dementia and ALS.

“I really think that these models are the future of studying neurological diseases and developing breakthrough treatments,” Sumathipala said. “[This scholarship] feels like one of these once in a lifetime opportunities that I’ll have to for my academic trajectory.”

Diao is a third-year medical student in the Harvard-MIT Program in Health Sciences and Technology. He graduated from Yale with degrees in statistics and data science and molecular biophysics and biochemistry. Originally from Sugar Land, Texas, his research at Harvard Medical School has focused on medical technology. He recently developed algorithms for classifying cancer types from histopathology images at PathAI and for predicting cardiovascular fitness from wearable devices at Apple. Diao’s research has been published in the New England Journal of Medicine and JAMA. Diao is a 2021 Paul and Daisy Soros Fellow and 2022 Forbes 30 Under 30 Honoree. As a Kanders Churchill Scholar, he will pursue a master’s degree in public policy at Cambridge University before returning to complete his medical education.

“I’m really excited to pursue the physician scientist path,” Diao said. “My goal is to build up an academic career as a professor and investigator studying performance and equity for medical algorithms…. Then in the long term, hopefully, applying it towards helping to shape how care is delivered through clinical guidelines, group policy, or whatever other means is most effective.”