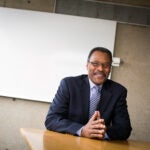 Healthy aging was one of the topics discussed at Harvard T.H. Chan School of Public Health’s fifth Annual State of Global Health Symposium. The event, hosted by the Department of Global Health and Population (GHP), focused on “Global Health and Aging,” a topic of keen interest in the public health sphere, with major consequences for human welfare, economic progress, and health care.

Held March 29 at Harvard Medical School’s Joseph B. Martin Center, the symposium began with welcoming remarks from GHP Chair Wafaie Fawzi and Dean Michelle Williams. The audience of some 150 people from across the University also received a video welcome from Tedros Ghebreyesus, director-general of the World Health Organization (WHO). He noted that aging is a priority issue for the organization and that WHO is committed to working with countries around the world to ensure that all older people receive the services they need, when and where they need them.

Keynote speaker John Beard, director of aging and life course at WHO, said that most people over age 65 are living with more than one disease, but many of them also report that they are in good health. He noted that the “World Report on Aging and Health,” released by WHO in 2015, proposes a new framework for thinking about healthy aging: steering the focus away from the absence of disease and toward the ability of an older person to do the things they have reason to value. Beard discussed WHO’s five strategic objectives identified in its “Global Strategy and Action Plan on Aging and Health 2016–2020;” a commitment to action; age-friendly environments; health systems that meet the needs of older people; long-term-care systems; and data and research to focus action where the evidence is strong.

The symposium also featured two panel discussions. “Physical and Cognitive Effects of Aging” featured Harvard Chan School’s Lindsay Jaacks, Walter Willett, and Goodarz Danaei, who served as moderator, as well as Arthur Kleinman from Harvard Medical School and the Faculty of Arts and Sciences. A panel on “Aging and Health Systems” included Rifat Atun, Winnie Yip, and moderator David Canning, and Uwe Sunde from the University of Munich. John Haaga, director of the Division of Behavioral and Social Research at the National Institute on Aging, gave closing remarks. The symposium also featured a poster session.