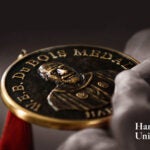 An esteemed leader in higher education, Hrabowski’s 30-year tenure as UMBC’s president received national recognition and praise for his commitment to advancing underrepresented minorities’ participation in science, technology, and engineering. He has also been a staunch proponent of colleges’ and universities’ place in the fight to dismantle structural racism.

“No voice in American higher education has been more persistent and prominent in that discussion than that of Dr. Hrabowski,” said Harvard President Larry Bacow. “His advocacy for inclusive excellence over 30 years as president of the University of Maryland, Baltimore County — best demonstrated through the phenomenal success of the Meyerhoff Scholars Program — continues to inspire extraordinary progress.”

While at the helm of UMBC, Hrabowski co-founded the Meyerhoff Scholars, an influential program that has increased the number of minority students with a degree in STEM by providing them with financial assistance, mentoring, and advising, catalyzing long-term career prospects while diversifying related fields. The program contributed to the success of more than 1,400 students of color and is a national model that has been replicated at other institutions across the country through the Meyerhoff Adaptation Project, an extension of the original program.

Influenced by Hrabowski’s service to advancing diversity and inclusion in the scientific community and the unprecedented success of the Meyerhoff Program, the Howard Hughes Medical Institute created the Freeman Hrabowski Scholars Program, pledging $1.5 billion to support scientists of color in their research.

“Dr. Martin Luther King Jr. above all believed in the power of each individual to contribute to the equity and community in service to others,” said Chief Diversity and Inclusion Officer Sherri Ann Charleston.  “No one embodies these values more than Dr. Hrabowski, whose life’s work has been to teach, mentor, and lead in ways that have created meaningful and lasting educational opportunities for others.”

Born and raised in Birmingham, Alabama, Hrabowski has been a champion for Civil Rights and civic engagement from a young age. A longtime advocate for racial justice, he was one of the hundreds of children arrested after participating in the historic 1963 Children’s March at the age of 12. At the age of 19, he received a degree in mathematics with highest honors from the Hampton Institute in Virginia, and received a master’s in mathematics and a Ph.D. in higher education administration and statistics at the University of Illinois at Urbana-Champaign.

Hrabowski’s numerous honors include being named one of  the Top American Leaders by The Washington Post and the Harvard Kennedy School’s Center for Public Leadership in 2011. Time magazine recognized him in 2009 as one of America’s 10 Best College Presidents, and again in 2012 as one of the 100 Most Influential People in the World in 2012. He has also been a recipient of the TIAA Theodore M. Hesburgh Award for Leadership Excellence and the Carnegie Corporation of New York’s Academic Leadership Award in 2011, two esteemed awards given to the foremost leaders in higher education. In 2012, President Barack Obama named Hrabowski as the inaugural chair of the President’s Advisory Commission on Educational Excellence for African Americans

Bacow established the Dr. Martin Luther King Jr. Lecture at Harvard in 2022 in commemoration of the 60th anniversary of King’s speech at Harvard Law School on the future of integration and racial justice. In establishing the lecture, Bacow noted it would be an annual opportunity to honor an individual who, “through activism, advocacy, scholarship, or service, has helped to advance the work that inspired Dr. King to act and lead.”

All members of the Harvard community were invited to submit nominations for this year’s lecturer beginning in January 2022. Nominations for the 2023 lecture are open at edib.harvard.edu.