For disease risk, is it genes or the environment? 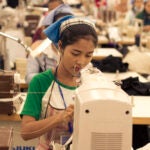 How much of a role do genes play in the onset of diseases and how much of a role does an individual’s environment play? It’s a question that has long intrigued epidemiologists. “It’s really the core question we’ve been asking in epidemiology,” said David Hunter, Richard Doll Professor of Epidemiology and Medicine at the University of Oxford and Vincent L. Gregory Professor in Cancer Prevention, Emeritus at Harvard T.H. Chan School of Public Health.

On Dec. 12, 2018, Hunter delivered the 168th Cutter Lecture on Preventive Medicine to an auditorium packed with students, faculty, and colleagues. “If you told me when I was a student here that one day I might be given this honor I would have never believed it,” he said.

Hunter trained as a medical doctor in Australia before coming to Harvard Chan School to study epidemiology. His thesis focused on sun exposure and skin cancer. “Perhaps I didn’t realize it then, but we were actually studying gene-environment interactions.”

Hunter spent time discussing large observational studies, such as the Nurses’ Health Studies, that are designed to help determine how social environments and individual behavior, including diet and exercise habits, influence disease risk. Observational studies present many challenges, including relatively small sample sizes and a reliance on self-reported data, which may not always be accurate, he said.

But he noted that questionnaires can provide accurate information on many associations, for example, between diet and the risk of cardiovascular disease or diabetes.  For revealing links between diet and cancer, though, such studies suggest that adult’s diets are not a major determinant of short-term risk of most cancers. “That’s something that has emerged rather painfully over the past 30 or 40 years,” he said.

Hunter then turned his attention toward genetic factors associated with disease risk. New sequencing technologies and genome-wide association studies, he said, produce “very robust measurements of risk.” The field has made huge gains in recent years in terms of identifying multiple gene variants that can be combined into polygenic risk scores, which indicate whether an individual may be at an increased risk of certain diseases.  These risk scores have matured for common diseases where lots of data are available, but are still in their infancy for less common diseases.

The emerging consensus is that genetic and environmental risks usually multiply together in a mathematically straightforward way. And when it comes to the genes versus environment debate, most of the time it’s both, Hunter said.

As for the future of his field, Hunter is optimistic that epidemiologists are moving in the right direction. He cited some trends, including biobanks that are collecting huge volumes of behavioral data and genetic information for analysis, and new devices that can collect accurate information on how long people sleep or how much they exercise.

“We know so much more than we used to know but there’s still so much more we can go find,” Hunter said. “Epidemiologists have the best job in the world because we never know what research opportunities are coming next.”