For 20 years, Harvard Kennedy School has been training LGBTQ leaders in state and local government 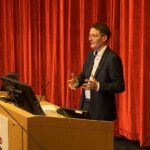 Preparing for the next pandemic

When Harvard Kennedy School was approached by the Victory Institute, a national organization supporting openly LGBTQ leaders, to create an executive training fellowship, no one imagined the lasting and profoundly positive result of such a collaboration. Twenty years later, more than 200 LGBTQ state & local leaders from all over the U.S. have come to Harvard Kennedy School through the program.

“When we started, there might not have been an openly LGBTQ person in the room,” said Michael Fleming, executive director of the David Bohnett Foundation.

Annise Parker, president of the Victory Institute, builds on that point. “LGBTQ people hold just 0.2 percent of elected positions in the United States and an even smaller proportion are in high-level elected positions.  Our partnership with the David Bohnett Foundation and collaboration with HKS Executive Education aims to change that by providing LGBTQ leaders with the tools and knowledge necessary to climb the political ladder and advance equality in the halls of power. The people in this program are our future big city mayors, members of Congress and governors.”

The original idea came from Fred Hochberg, who served in the Clinton and Obama administrations. A longtime LGBTQ activist, he brought the idea to the Victory Institute after attending the HKS program, Senior Executives in State and Local Government in 1996.  The Victory Institute teamed up with the David Bohnett Foundation, and a long and beneficial collaboration was born.

The Senior Executives in State and Local Government program offers senior civil servants and elected officeholders the chance to hone their skills with HKS faculty and accomplished peers. “The program began in 1978 and today you can’t go into any significant city or county in this country without meeting one of our alums,” said faculty chair David King.

The Bohnett fellowship began in 2002 sponsoring three participants to the HKS Executive Education program, which runs on the HKS campus twice a year. Fleming, who completed the three-week program in 2005, recommended the Bohnett Foundation become a significant player.  An initial $500,000 in seed funding has now grown to $2.7 million investment to date. The Foundation provides the funding and the Victory Institute vets and recommends potential program participants.

David C. Bohnett, chairman of the David Bohnett Foundation, saw the HKS Executive Education program in leadership training as the best way to work for the civil rights goals he cared deeply about, specifically marriage and family equality.  “If these past twenty years of investing in the state and local program have taught us anything,” Bohnett said, “It is that representation matters, and matters deeply.”