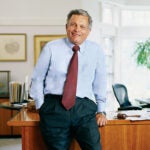 In the wake of Hurricane Ian, with some Florida hospitals closed or damaged and their health care staff exhausted, a team of 37 Massachusetts doctors, nurses, pharmacists, respiratory therapists, and paramedics traveled near Sarasota — north of the state’s most-damaged areas — to run an emergency department in tents outside of a local hospital.

During their weeklong clinical operation, working in partnership with Sarasota Memorial Hospital-Venice, the team saw nearly 500 patients, treating everything from hurricane-related injuries to chronic conditions, according to Paul Biddinger, chief preparedness and continuity officer at Mass General Brigham and director of the Emergency Preparedness Research, Evaluation and Practice Program at Harvard T.H. Chan School of Public Health.

Disaster Medical Assistance Teams, such as the one from Massachusetts, exist across the U.S. within the Department of Health and Human Services (HHS). After disasters like hurricanes, states can request assistance from the federal government, which coordinates the deployment of the teams. The Massachusetts crew, one of two in Massachusetts, wound up in Florida because they were on call for the month of September; after the team finished their stint, another DMAT took its place.

The Massachusetts group brought with them all the equipment needed to establish an emergency department in the hospital parking lot—five tents, generators, air conditioning units, and lab and medical supplies. The outdoor operation provided much-need support for the hospital, a 110-bed facility with a 28-bed emergency department, which was struggling to care for more than three times as many emergency patients as normal because other nearby hospitals were either damaged or closed.

While some of the people cared for in the tent-based emergency department had injuries related to the hurricane — like stepping on a nail or cutting themselves during cleanup — many others were dealing with the consequences of not getting their usual medical care. “A lot of doctors’ offices were closed, pharmacies were closed,” said Biddinger. “People ran out of their insulin or their blood pressure medications. So in addition to the normal reasons people go to the ER — for things like chest pain, trouble breathing, or infectious symptoms — there was a surge of patients who were either injured or made ill because of the interruption of medical services.”

What impressed Biddinger most during his stay in Florida was the dedication of the local health care staff. “We saw a lot of extraordinary behavior by the medical community,” he said. “There were people who had lost their homes or who had injured family members who still were coming to work and trying to take care of patients. Their dedication to doing their jobs despite what they lost personally, and what they’ve been through, was amazing.”