First-year students warm up at ‘ice-breaker’ 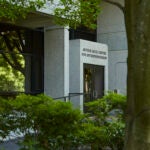 With the feel of autumn in the air, hundreds of first-year students filled Tercentenary Theatre on Aug. 31 for the College’s second annual Community Night. The goal: to provide a platform for students to meet and make friends.

The event was a partnership between the Dean of Students Office (DSO) and the Office of the Arts (OFA), and centered on a series of “ice-breaker activities” by PlayFair. The group touts their mission as “Entertainment! It’s fun! It’s the perfect way to make new campus friendships!”

And for the Harvard College students who filled the Yard, they did not disappoint.

“I was so excited to not only see a large crowd of students, but more importantly an enthusiastic and engaged crowd,” said Dean of Students Katie O’Dair, who attended the event. “I saw a lot of connections being made, and hopefully the beginnings of a lot of new friendships, and people beginning to find their place and their community here.”

“The event was brought to life through a fusion of fun student activities that fostered connection, inclusion, and a collaborative community art piece,” said organizer Tomika Smith, the DSO’s assistant director of student programs.

Although all College students were welcome, the event was geared toward first-years. Activities included quickly breaking out into random groups of three, making introductions, followed by groups of five and then eight. Next up was finding someone the same height as you and introducing yourself, then finding someone wearing similar shoes. The lightning round of breakout groups allowed students to make acquaintances with numerous peers in a short period of time. The PlayFair leader asked students to join into groups based on their birth months. Danoff Dean of Harvard College Rakesh Khurana arrived just in time to join the November crowd.

“The arrival of our first-year students is such a joyous occasion for all of us at Harvard,” said OFA Director Jack Megan. “But for some students — indeed, for many of us — being new isn’t always easy. So it was a thrill to see connections being made by strangers, and to sense the energy and excitement among members of the class. They are amazing people — and the same can be said of colleagues in the Dean of Students Office who devoted so much passion and thought to making this a special night for our first-years.”

After the group activities, students made their way to a photo booth, complete with props and costumes. Photos of the newly made friends were hung along branches, forming a “Communitree.”

“They were eager to commemorate the experience by taking pictures in the photo booths and then clipping them to twine that was draped around tree lights,” Smith said. “These trees symbolized the ways in which these students are coming together in unity as part of our new and growing Harvard community.”