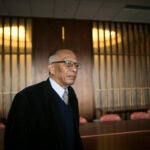 For the first time in its history, the Harvard College Debating Union recently won the title of No. 1 Club of the Year becoming the top-ranked team in the nation, and breaking Yale’s 10-year winning streak.

Aditya Dhar ’21 and Paloma O’Connor ’21 also won the Team of the Year, bringing the honor to Harvard for the first time since 2014. O’Connor is the first woman from Harvard to win the award.

Under the rules of the American Parliamentary Debate Association, teams and individuals are awarded points in every debate, and clubs whose members had the highest combined scores advance to the national championships. The Harvard Club sent teams to tournaments nearly every weekend of the 2019-2020 academic year, winning six and reaching the finals in five others. The Union’s top ranking was announced July 12.

By season’s end, Harvard had amassed 515.75 points, more than any other team in the country and nearly 100 points more than Yale, the second-highest ranking club, which won 426 points.

“I’m ridiculously proud of this team. There were a few individuals who pretty much never missed a weekend and got heroic results all over the country, but 27 different people got points, and we followed through on a plan that was years in the making to successfully pull this off for the first time,” said Jake Miller, one of the HCDU’s coaches. Sophia Caldera, another coach, added, “It’s especially meaningful to see the [Club of the Year] win because, unlike individual tournament results, COTY recognizes the work of the entire team.”

O’Connor said the most important win for her and Dhar came in the penultimate round of the spring semester.

“It was semifinals of the Tufts tournament, days before all Harvard students were asked to vacate campus. We were debating two absolutely superb debaters from George Washington, who were then the top-ranked team. The round determined who would win the Team of the Year award—we were second by a margin, and all of us were acutely aware this tournament was the last tournament of the semester because of the pandemic,” she said. “It was certainly not the position Aditya and I hoped we’d be in — we had planned on having another two months of tournaments to get our last few points! — but it all worked out in the end.”

The Harvard College Debating Union is Harvard’s only internationally competitive debate team. Members compete in both the American Parliamentary and British Parliamentary styles, allowing them to claim both national and world championship titles. Tryouts are held at the beginning of each academic year. No prior debate experience is required.