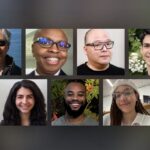 Makeda Best, the Richard L. Menschel Curator of Photography at the Harvard Art Museums, recently received the prestigious Photography Catalogue of the Year award at the 2022 Paris Photo–Aperture PhotoBook Awards. Selected each year since 2012, the awards also recognize excellence in two other major categories of photobook publishing: First PhotoBook and PhotoBook of the Year.

Best was honored for her 2021 publication “Devour the Land: War and American Landscape Photography since 1970,” which explores how contemporary photographers have responded to the U.S. military’s impact on the domestic environment since the 1970s, a dynamic period for environmental activism as well as for photography. The catalog accompanied an expansive exhibition on view at the Harvard Art Museums from Sept. 17, 2021 through Jan. 16, 2022.

The reconsideration of photographic landscape traditions has been a major area of scholarship in the last few years. In “Devour the Land,” Harvard Art Museums curator Makeda Best continues this vital effort by bringing together sixty contemporary artists who explore the intersection of environmental degradation, environmental activism, and the military-industrial complex as a cornerstone of their work. In-depth analyses by Best and a host of other essayists introduce each of the six thematic chapters, offering context for the following suites of work, each by a wide-ranging, intergenerational set of artists. The book also includes insightful interviews with key photographers that appear on short-trimmed and multicolor pages, further helping to guide the reader through each section.

Lesley A. Martin, creative director of Aperture and one of the jurors who participated in the shortlist selection for this year’s awards, observed:

“Devour the Land” is designed like a manual: a spiral-bound paperback that comes off initially as a somewhat provisional form, but that feeling is quickly allayed by the depth and criticality of the content— it’s a brilliant, loose form that gives the reader easy access to the complex and compelling layers of information within.

The catalog, edited by Best, presents a lively range of voices at the intersection of art, environmentalism, militarism, photography, and politics. Alongside interviews with prominent contemporary artists working in the landscape photography tradition — Sheila Pree Bright, Terry Evans, Ashley Gilbertson, David T. Hanson, Stacy Kranitz, Jin Lee, Richard Misrach, Barbara Norfleet, and Oscar Palacio — are essays by Best, Steven Hoelscher, Abrahm Lustgarten, Courtney J. Martin, Katherine Mintie, and Will Wilson. The publication also features works by dozens of photographers, including by the interviewees mentioned above, as well as Ansel Adams, Robert Adams, Per Brandin, Robert Del Tredici, Dorothy Marder, Alex Webb, and many more. Ed Roberson contributed two poems from his collection “To See the Earth Before the End of the World” (2010).

Watch a trailer for the “Devour the Land” publication on Vimeo or on YouTube. Learn more at harvardartmuseums.org/devourtheland.