A look at CRISPR’s new tricks 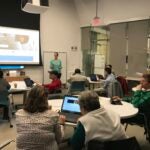 David Liu earned the title “Gene Corrector” for good reason. A professor of chemistry and chemical biology at Harvard University and core institute member of the Broad, Liu is also a pioneer of CRISPR-Cas9 gene-editing technology.

In recent years, Liu has earned recognition for major advances in CRISPR’s versatility and accuracy. In 2016, he and postdoc Alexis Komer reported CRISPR’s first base editor, a technique that makes single-letter changes in the genome. Already in use in wheat, zebrafish and mice, the tool helps treat genetic diseases, grow climate-resilient crops, and develop designer materials, foods, and drugs.

A good doctor, presented with an inconclusive case, chases diagnostic clues in a patient’s environment, family medical history, and more. Cell biologists, likewise, have pursued methods to record moments in a cell’s life in order to understand its future.

Armed with a log of intimate cellular data, researchers could unravel how cells transition from stem to muscle, neuron, and other cell types or from normal, healthy cells to cancer. This, in turn, could lead to greater understanding of disease progression and aging.

So, in the future, a good doctor might be able to review our cellular histories to provide accurate predictions about our future health. But, Liu cautions, such individualized treatment may be years or decades away.

Despite a wealth of recent advances and publicity, CRISPR remains imperfect.

The most popular CRISPR enzyme (spCas9) relies on specific DNA markers to pinpoint where to cut or edit. It scans the genome for familiar stretches of DNA but can recognize only 1 in 16 sites.

Because of its restricted range, spCas9 cannot reach a number of genes associated with human disease. And, it can confuse similar DNA stretches, resulting in risky “off-target” edits.

But now, Liu has engineered a modified version of the CRISPR-Cas9 enzyme. Named extended-PAM Cas9s or xCas9s, his laboratory-produced enzymes are both more versatile and precise. They accept more DNA sites — at least 1 in 4 — and result in far fewer “off-target” edits. So, even though xCas9 can target more genes, it’s more discriminating than its predecessor.

“The study thus demonstrates,” Liu notes, “that laboratory evolution can be used to address one of the biggest limitations facing the use of nature’s SpCas9 … without sacrificing, and indeed while improving, DNA specificity.”