Nutrient loss in rice could lead to vitamin B deficiencies 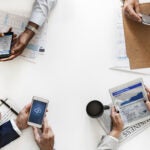 Recent research has shown that rice grown under carbon dioxide levels that could be reached as soon as 2050 could lose 17 to 30 percent of its B vitamin content. A new study from Harvard T.H. Chan School of Public Health now estimates that this trend could put tens of millions of people at new risk of deficiencies in major B vitamins including thiamin, riboflavin, and folate.

According to the study, Africa and Asia would be most affected, as they are regions that are heavily reliant on rice for nutrition.

On average, rising carbon dioxide levels could lead to an additional 132 million people with folate deficiency, 67 million more with thiamin deficiency, and 40 million more with riboflavin deficiency. Quantifying one small portion of the health burden related to these changes, the study estimated that folate deficiency among mothers could lead to a 0.5 percent increase in neural tube birth defects, which translates roughly to an additional 27,900 life-years lost annually and 260 more deaths every year.

Because elevated CO2 concentrations are likely to reduce B vitamins in other crops beyond rice, the new findings likely underestimate the negative global health impacts, the authors wrote.