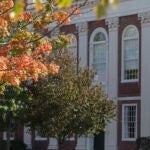 A study from Harvard T.H. Chan School of Public Health, which found that the death toll from Hurricane Maria in Puerto Rico was likely much higher than initial estimates, was the most popular academic paper of 2018, according to the data science company Altmetric.

After Hurricane Maria slammed into Puerto Rico in September 2017, officials initially said that there had been only 16 storm-related deaths. But Harvard Chan researchers, along with colleagues in Puerto Rico, estimated that there had actually been between 800 and 8,500 excess deaths related to the hurricane through the end of December 2017.

In a Dec. 11, 2018 article in Research Information, Satchit Balsari, research fellow at the FXB Center for Health and Human Rights and a co-author of the Hurricane Maria paper, said, “Given the large difference in our mortality estimates and the official counts, it was gratifying to see that the media played its role in efficiently translating a scientific paper for mass consumption.”

Another paper in the top 10 of Altmetric’s list also included Harvard Chan co-authors. The study, led by Brigham and Women’s Hospital, found that a diet comprised of roughly 50 percent of daily calories from carbohydrates was linked with lower risk of early death than both high- and low-carb diets.