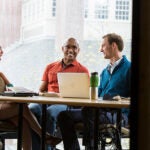 The event was hosted by Mothers for Justice & Equality (MJE), a community organization in Roxbury that empowers mothers and youth to challenge the normalization of violence.

Markey noted that tens of thousands of Americans die each year from guns — a number that includes homicides, suicides, and accidents. “When disease brings this kind of widespread death, doctors and public health researchers study the causes so that they can find solutions. And the federal government invests in those efforts,” he said. But the Centers for Disease Control and Prevention (CDC) has not funded research on gun violence since 1996, when Congress passed an amendment to a spending bill that forbade the CDC from using money to “advocate or promote gun control.”

Markey called on Congress to fund CDC research on gun violence prevention, and also reiterated his call for other gun control measures including restricting sales of military style semiautomatic rifles such as the ones used in the shooting in Florida and other recent mass shootings, closing Internet and gun show loopholes that allow sales without background checks, and prohibiting people on the terrorist watch list from purchasing weapons.

“Enough is enough,” Markey said. Although past gun control proposals have gone nowhere at the federal level, he said that he feels optimistic that the current “children’s crusade,” spearheaded by the Parkland high school students, may prove to be a turning point. Young people aren’t going to accept no for an answer, Markey said. “They are shouting and pleading for meaningful action.”

Monalisa Smith, founder, president, and CEO of MJE, who lost a nephew to gun violence, made an impassioned plea for common sense gun laws. She described the ripple effect of pain that one young person’s death can cause in a family and a community. “How can we continue to endure this?” she asked….

Williams said that research can provide solutions to this public health crisis. Data such as the type of gun used in a mass shooting and how it was obtained can provide critical evidence for policy and prevention efforts. This is why federal funding for firearms research is so important, she said, calling the current restriction “an act of willful negligence.”

Matthew Miller, co-director of the Harvard Injury Control Research Center and adjunct professor of epidemiology, offered sobering statistics on gun homicides in the United States. They are 25 times higher than other high-income nations and 50 times higher for youth and young adults. But the nation is not inherently more violent than other countries, he said. The difference is easier access to guns….