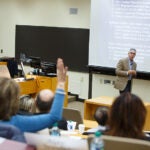 On April 4, the Harvard Graduate School of Education’s Making Caring Common (MCC) Project and Game Change: The Patriots Anti-Violence Partnership will hold an Askwith Forums panel to examine the state of sexual violence in schools and how both public and private actors are working to encourage a safer educational sphere.

Sexual Misconduct is Common in Schools