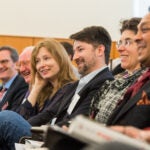 Proposed changes in how the Environmental Protection Agency (EPA) assesses the health risks of fine particulate matter, a form of air pollution that has been linked to an array of diseases, would significantly undermine the agency’s ability to protect the public from air pollution, according to a new paper in Science co-authored by Francesca Dominici, Clarence James Gamble Professor of Biostatistics, Population and Data Science at Harvard T.H. Chan School of Public Health.

The paper, published on March 21, 2019, noted that the EPA’s Clean Air Scientific Advisory Committee (CASAC) has recently recommended that the EPA limit the types of epidemiological studies used to assess the health risks of air pollution, instead of allowing many sorts of analyses to be debated and subject to peer review. If such a recommendation is adopted at an upcoming March meeting, it would “alter the approach that the EPA has used for more than a decade to set health-based air pollutant standards,” the authors wrote.

CASAC is currently headed by Louis Anthony Cox Jr., a Denver-based risk assessment consultant who has worked for the oil, chemical and healthcare industries. Cox said in December that his panel wasn’t convinced by the EPA’s 1,800-page assessment of small particle air pollution, which cited more than 2,800 research papers on the subject and was authored by more than 50 of the world’s leading experts on air pollution — and reviewed by dozens more, according to a March 21, 2019 Los Angeles Times article. That assessment concluded that even low levels of exposure to particulate matter can lead to illness and death. Cox accused the authors of that assessment of being subjective in their conclusions and using bad science, according to the article.

“More than 23 million Americans live in areas that exceed the current particulate matter standard, and more than a third of the nation’s population lives in areas that exceed the current ozone standard,” wrote Dominici and co-author Gretchen Goldman of the Union of Concerned Scientists. “If the administration sets air pollution standards that fail to rely on the weight of the evidence on air pollution and health, not only are we casting scientific progress aside, but we risk the health of thousands breathing unhealthy air.”