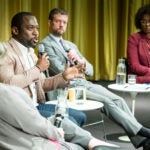 American Repertory Theater (A.R.T.) at Harvard University announced today that it will produce in its 2022/23 season the North American premiere of “Life of Pi,” the acclaimed theatrical adaptation by Lolita Chakrabarti of the best-selling novel by Yann Martel. Max Webster will direct, with Tony Award winner Tim Hatley providing scenic and costume design and Finn Caldwell providing puppetry and movement direction.

In “Life of Pi,” 16-year-old Pi and his family set off to emigrate from India, but after their ship sinks in the middle of the Pacific Ocean, Pi is left stranded on a lifeboat with just four other survivors — a hyena, a zebra, an orangutan, and a Royal Bengal tiger. Time is against them, nature is harsh, who will survive? Called “extraordinary and unmissable” by The Guardian for its inventive puppetry, this highly imaginative theatrical adaptation brings one of the most beloved works of fiction to the stage to tell its epic story of endurance and hope.

“I’m thrilled for A.R.T. to collaborate with this incredible team of artists in creating the North American premiere of ‘Life of Pi’ and to introduce this deeply imaginative theatrical adaptation to our audiences,” says A.R.T. Terrie and Bradley Bloom Artistic Director Diane Paulus. “Creative ingenuity and extraordinary puppetry bring this powerful story to life. I look forward to welcoming families back to the Loeb Drama Center this holiday season to experience this breathtaking theatrical event.”

“Life of Pi” will run December 2022 through January 2023 at the A.R.T.’s home in Harvard Square, the Loeb Drama Center, located at 64 Brattle St. in Cambridge, Massachusetts. The production’s cast will be announced at a future date.

★★★★★ “Breathtaking. It will make you believe in the power of theater.” – The Times of London

★★★★★ “An extraordinary journey. Unmissable.” – The Guardian

“One of the most visually stunning shows I’ve ever seen.” – Time Out London

Additional productions in A.R.T.’s 2022/23 Season and programming, including education, engagement, and virtual offerings, will be announced in the coming weeks.

The first production to be announced in the A.R.T.’s 2022/23 line-up, “Life of Pi” will first be available for purchase as part of an A.R.T. subscription, which will be available in June. Single tickets to individual productions will be available on a rolling basis at later dates. More information can be found at AmericanRepertoryTheater.org/Subscribe.