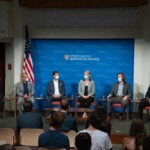 The IOP Forum gives voice to the U.S. experience in Afghanistan

John Ruggie, the Berthold Beitz Research Professor in Human Rights and International Affairs at Harvard Kennedy School and the architect of an authoritative global standard on business and human rights, passed away on Sept. 16. He was 76.

A political scientist, Ruggie’s academic work in the field of international relations focused on the impact of economic and other forms of globalization on global rule-making and the emergence of new rule-makers. He helped refine and advance the constructivist approach to international relations, which emphasizes the development of norms, identities, and ideational power, and then demonstrated its value in his work at the United Nations. His academic stature was confirmed by surveys published in Foreign Policy, which named him as one of the 25 most influential international relations scholars in the United States and Canada.

He also worked tirelessly on the application of his work to complex global governance challenges. From 1997 to 2001, he served as the UN assistant secretary general for planning under Secretary-General Kofi Annan, playing a key role in institutional reform and renewal at the UN, for which the United Nations was awarded the Nobel Peace Prize in 2001. He was also instrumental in establishing the UN Global Compact and the Millennium Development Goals (MDGs). Today, the UN Global Compact is the world’s largest corporate sustainability initiative, directly involving more than 14,000 companies in some 160 countries and the MDGs have been expanded to the Sustainable Development Goals.

In 2005, he was appointed as the UN secretary-general’s special representative on business and human rights, authoring the UN Guiding Principles on Business and Human Rights following a six-year process of research, pilot projects and consultations around the world. After being unanimously endorsed by the UN Human Rights Council in 2011, the Guiding Principles have become the authoritative global standard on business and human rights, increasingly integrated into national legislation and voluntary corporate responsibility frameworks.

On the 10th anniversary of the Ruggie Principles, as they are often called, he described their simple but powerful legacy: “[They] have helped turn the idea that companies are responsible for preventing and addressing adverse impacts of their business on people’s basic dignity and equality into a mainstream proposition — thereby helping to provide a path beyond shareholder primacy toward multi-fiduciary obligations.”

Harvard Kennedy School Dean Doug Elmendorf called Ruggie “a colleague, teacher, and friend to so many people here and around the world.

“His loss leaves a huge hole in the social fabric of the Kennedy School and of the world,” Elmendorf said.

Others paid tribute to his academic and public policy legacy and his humanity and personal warmth.

“He combined a superb intellect and strong principles with great kindness and compassion and a deep commitment to achieving practical progress in global efforts to respect human rights,” said Jane Nelson, director of the Kennedy School’s Corporate Responsibility Initiative, which Ruggie led. “He mentored, advised, and inspired thousands of students, as well as policy makers and practitioners from around the world, and touched the lives of many others.”