A lifesaving therapy and the researcher who helped launch it 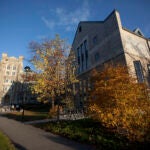 Oral rehydration therapy (ORT) — a mixture of water, sugar, and salt that is remarkably effective at rehydrating people with cholera or other diarrheal diseases — is credited with saving tens of millions of lives worldwide.

On Nov. 19, 2018, a standing-room-only crowd gathered in Kresge G3 at Harvard T.H. Chan School of Public Health to mark the 50th anniversary of the first clinical trials of ORT, and to honor Richard Cash, senior lecturer on global health at Harvard Chan School, who was instrumental in those trials and in bringing this low-tech, inexpensive therapy into worldwide use.

Thirteen of Cash’s colleagues and students participated in the event, which was co-hosted by the School’s Department of Global Health and Population and the Harvard Global Health Institute (HGHI). Several of the participants also played a key role in rolling out the use of ORT on a large scale. Often interspersing their remarks with humorous stories about Cash; they all attested to his enormous contribution to public health.

In opening remarks, Ashish Jha, K.T. Li Professor of Global Health at Harvard Chan School and HGHI director, noted that while diarrhea kills about 500,000 people each year — half of them children — that number is down roughly 80 percent since 1980. Before the introduction of ORT, the standard of care was to treat diarrhea with intravenous (IV) fluids — which is “really expensive, often dangerous, and often not available,” he said. “A lot has gone into changing that landscape.” He called Cash’s work “incredibly inspiring and impactful.”

David Nalin, professor emeritus at Albany Medical College, collaborated with Cash on the pioneering work that showed ORT’s effectiveness. The two conducted clinical studies with cholera patients in Dacca, Pakistan (now Dhaka, Bangladesh) in the late 1960s that showed that the water-sugar-salt solution was remarkably effective in reversing dehydration. ORT’s effectiveness was demonstrated on a much larger scale in 1971, during the India-Pakistan War, when it was successfully used to treat large numbers of refugees. The evidence was clear, Nalin said, ORT was much more accessible and cost-effective compare to IV treatment, and it greatly reduced mortality rates. Nalin said his and Cash’s research led to their lifelong commitment to promote the use of ORT around the globe and to establish national ORT training programs.

Lincoln Chen, president of the China Medical Board — who also worked in the late 1960s and early 1970s in Pakistan and, later, in Bangladesh — recalled how people with little access to hospitals or clinics were taught how to make a simplified form of oral rehydration solution (ORS) on their own, using a pinch of salt, a fistful of sugar, and half a liter of water, in order to treat sick family members. This field work was critical in scaling up the use of ORT, he said.