Knitting for a good cause 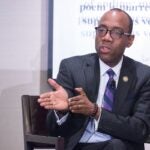 The strains of Bach, Stravinsky, and jazz aren’t the only sounds coming from the Music Department and the Eda Kuhn Loeb Music Library lately.  On most Friday afternoons the sound of knitting needles and can be heard clattering away.

The weekly knitting circle, currently composed of graduate students, staff, and anyone affiliated with the department and library,  is an ongoing gathering to promote well-being, to “unwind,” and to work on individual yarn and fiber projects.  In addition to making interesting and intricate items for themselves, family, and friends, several members of the group knit for charitable causes.

Recently the group focused on a special mission orchestrated by Patricia O’Brien, the music library administrative coordinator, in concert with NuDay Syria, an international non-profit organization which among other things ships humanitarian aid to displaced people inside Syria. The organization provides clothing and other urgently-needed items for Syrians who have been displaced because of the current political situation.  O’Brien, who serves on the board of directors of NuDay, and has worked with the organization since before its inception in 2013, reports that the collected items are shipped to Syria at least monthly and are given directly to people who need them.

The knitting effort came just in time for the cold winter month, when warm clothing and accessories are of particular importance. If you would like to donate your own knitting, or learn about other way to help, please contact Patricia O’Brien.