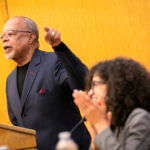 “25 Million Sparks: The Untold Story of Refugee Entrepreneurs,” the recent award-winning book by Andrew Leon Hanna, J.D. ’19, has been named to the Financial Times Best Books of 2022 list.

The book, which was published by Cambridge University Press in May, centers on the stories of three Syrian women entrepreneurs living in the Za’atari refugee camp in Jordan. The three entrepreneurs — Asma, Malak, and Yasmina — fled the Syrian War and have gone on to create a wide range of inspiring ventures in the camp, leveraging their talents in storytelling, wedding dress design and hairdressing, and art. The book uses these stories as an anchor to discuss the broader refugee crisis — there are more refugees today than at any time in world history — and the refugee entrepreneurship phenomenon in more than 20 camps and cities around the world. It discusses the research behind why refugees are 1.5  to 2 times more entrepreneurial than native-born citizens, as well as the magnitude of their contributions to their adoptive homes.

“The book’s mission is to spotlight the power, creativity, and dignity of refugee communities around the world,” said Hanna. “Refugees are among the most entrepreneurial people on Earth, despite facing the most extreme challenges. But beyond relaying the major economy value refugees provide and the incredible talents they possess, this book seeks to tell a human story that points to a more important truth: refugees are equal human beings deserving of dignity, simply for who they are.”

The book has received acclaim internationally, and Hanna has used the attention to feature the entrepreneurs in the media more broadly. For example, Harper’s Bazaar recently featured a story about Asma and the book. Hanna has spoken at Stanford University, University of Toronto, Duke University, and more during his book tour.

Hanna began writing the book while he was a student at Harvard Law School. In his third year, he was awarded the prestigious Financial Times and McKinsey Bracken Bower Prize for the best business book proposal by an author under the age of 35. He used that prize funding and support to travel to Za’atari, Utica, and elsewhere while at Harvard and after graduation, meeting refugee entrepreneurs from a variety of backgrounds.

Hanna was an editor of the Harvard Law Review, board member of the Harvard African Law Association, and student attorney at Harvard Defenders, where he represented low-income criminal defendants in Massachusetts courts’ show-cause hearings. As he put the impact of HLS on his writing: “Harvard Law was an amazing place to begin writing this book. It was a place where I could practice making compelling, coherent arguments infused with humanity and care for others. I’m so grateful for the mentors there and the space to create.”