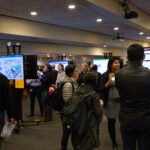 Andrew Leon Hanna ’19, a Harvard Law School student and c0-founder of a Harvard Innovation Labs’ VIP startup, has won the 2018 Bracken Bower Prize for best business book proposal by an author under the age of 35. Hanna’s book, “25 Million Sparks,” will examine the rise of refugee entrepreneurs in a global crisis.

The judges for The Financial Times and McKinsey & Company award commented that Hanna’s proposed book will, “…uncover the powerful entrepreneurial spirit unleashed by the toughest of global forces — the refugee diaspora. We can’t wait to read more about the stories he discovers and what they can teach us all.”

Hanna plans to use the prize money — about $19,000 — to travel to three different refugee camps to hear stories, and see how people have built new lives using their creativity. The first camp is in Zaatari, in Jordan, and is one of the world’s largest refugee camps, host to 80,000 Syrian refugees. “They’ve given birth to 3,000 new ventures that generate a total of $13 million a month in revenue.” Hanna said in an interview with Harvard Law Today. “And refugee camps are just half of the book’s focus; host countries are the other half. For that I plan on talking to refugee entrepreneurs in the United States, Western Europe, Lebanon, and elsewhere.”

The prize is designed to encourage young authors to tackle emerging business themes, with a focus on the challenges and opportunities presented by growth. Hanna’s book proposal won out over entries from 22 countries, with topics including technology, gender, and the ethics of business.

Hanna is completing his J.D. at Harvard Law School, where he is editor of the Harvard Law Review and recipient of the Oberman Prize. He is the co-founder and CEO of DreamxAmerica, a startup at Harvard Innovation Labs that joins filmmaking and impact investing to empower immigrant entrepreneurs.