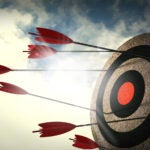 Marie Yovanovitch makes case for standing by Ukraine as war drags on, warning that defeat would embolden Putin and other dictators

Despite Ukraine’s impressive battlefield successes against Russia and the still-unified military, intelligence, and financial backing of the West — including a $2.5 billion military aid package announced by the U.S. last week — one ex-diplomat with deep experience in the region does not expect the conflict to wind down anytime soon.

“It will be a grinding war for quite some time,” said Marie Yovanovitch, the U.S. ambassador to Ukraine from 2016 to 2019, during a conversation with Emily Channell-Justice, director of the Temerty Contemporary Ukraine Program at Harvard’s Ukrainian Research Institute, Thursday night at the Barker Center.

Yovanovitch was the nation’s top diplomat in the Republic of Armenia and in Kyrgyzstan before accepting the Ukraine posting in the waning days of the Obama administration. She was thrust into the national spotlight in 2019 (“Certainly, the worst year of my life”) when she told the House Intelligence Committee about being recalled by President Donald Trump amid a smear campaign orchestrated by Rudy Giuliani, Trump’s personal attorney.

Since Russia’s invasion of Ukraine on Feb. 24, the U.S. has approved $27 billion in assistance to President Volodymyr Zelensky’s forces. Growing complaints from many Republicans in the new Congress, including Speaker Kevin McCarthy, about maintaining that level of aid have alarmed Ukraine supporters.

“What I hope that statement means is ‘We want accountability for our funds.’ We always want that. We want to make sure our money’s going to or weapons are going to what it’s intended for.” The U.S. is tracking its support “very, very closely” and so far, there’s no evidence of waste or corruption, she said.

The U.S. cannot soften its support for Ukraine because a defeated Russia is critical to America’s domestic and global interests, she said. “If Russia prevails, if other dictators start thinking, ‘We can do this, too. We don’t have to play by their rules,’ it makes the world less safe.”

Yovanovitch said Russian President Vladimir Putin made three “bad miscalculations” when he invaded Ukraine. First, he assumed the country would not fight back. Second, he believed the Russian military was so large, so powerful and capable, it would simply overwhelm whatever defensive efforts Ukraine tried to put up. Finally, with a new U.S. president and German chancellor, and political turmoil in the U.K. and France, Putin bet that the West would not respond cohesively or forcefully.

Though the war is far from over, talk of what a post-war Ukraine might look like has already begun, both inside and outside the country. Yovanovitch said it’s critical that the U.S. and other allies understand that it will not be their call.

“These have to be decisions by Ukrainians for Ukrainians,” she said. “We in the international community — whether it’s an international financial institution or a country or the U.N. — we have a role, but it’s not a primary role. We need to remember that and be a little bit humble. Ukrainians need to be the agent for their own future, for their own changes.”

She called Ukraine’s agreement to begin the long process of one day joining the E.U. “an important step.”

“They don’t want to live in a future that is like the past, where they’re just making oligarchs richer. They want to live in the Ukraine that is ruled by the rule of law, that is the product of their European history and a European future.”