Will Trump be charged after House panel’s Jan. 6 report? 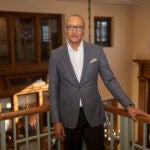 What is case for prison abolition?

After 18 months the House committee investigating the Jan. 6 attack is set to release a final report of its work and will refer former President Donald Trump to the Department of Justice for investigation and potential criminal prosecution for his role in trying to overturn the 2020 election. The DOJ is not obligated to follow the recommendations, and it is unclear whether it will. But that doesn’t mean the committee’s work is without value, says Neil Eggleston, a lecturer on law at Harvard Law School who served as White House counsel to President Barack Obama from 2014 to 2017 and as associate White House counsel during the Clinton administration. Eggleston spoke to the Gazette about the Jan. 6 committee’s findings before the release of the full report — portions were released earlier — and what the Department of Justice may be doing behind the scenes.

GAZETTE: Since the referrals have no legal weight, how should they be understood — as history records, as political or moral statements, as a road map for prosecutors?

EGGLESTON: I don’t think that people should think that the Department of Justice will be pressured into indicting former President Trump because of referrals by Congress. That’s not the way the Department of Justice works. They have Jack Smith, a real career prosecutor, working on that. The real impact will be that the committee put together an extremely persuasive and massive statement of facts and testimony and documents that would be of use to the Department of Justice as it goes about its own investigation. What the committee put together is a truly remarkable document, the likes of which I really haven’t seen, and I worked on the Iran Contra investigation for Congress. What this committee has done is a real tour de force, I think.

GAZETTE: Remarkable in what way — the volume and scope of the information they’ve presented?

EGGLESTON: The volume of information, the depth. Particularly with regard to your question about the Department of Justice, is also the level of detail. The executive summary has a massive number of citations to primary documents and testimony. This is not the sort of general referral you sometimes see from Congress. What the Jan. 6 committee has done is provide enormous factual basis in support of the recommendations they made — that’s the real contribution they’ve made and will be a real contribution to the Department of Justice.

GAZETTE: Is DOJ perhaps less likely to bring charges now out of a desire to appear independent and not doing the bidding of the Jan. 6 committee?

EGGLESTON: I don’t think so. I think the Department of Justice will make its own decision about what charges, if any, to bring against President Trump and the other individuals who were referred by the committee. I don’t think that’s much of a worry. Having been a prosecutor in the Southern District of New York and now a defense lawyer, the one impact that occurred to me is that the committee has produced prior statements by these witnesses. If there is an indictment and trial, the presence of those prior statements will make the trial a bit more complicated for the DOJ. When witnesses have to describe events on multiple occasions, there will inevitably be discrepancies in the various versions of the events. But that comes with the territory in connection with a congressional investigation. I don’t think that the Department of Justice will be dissuaded by that. But it will create a little bit of an additional level of difficulty if there is an indictment, and then, if there’s a trial.

GAZETTE: How much of the committee’s materials will DOJ review? What do you think prosecutors will find most useful?

EGGLESTON: I think they’ll review all of it. The committee will certainly make its raw material available to the department, including the videotaped depositions, the transcribed testimony, and the documentary evidence. I assume that will all be made available to the Department of Justice. And so, the Department of Justice is going to review all that material and maybe go back to some of those witnesses. Hope Hicks and Kellyanne Conway said some things that were revealed by the committee that in the day or two before and on the day of the insurrection, Jan. 6, they had gone to the president and urged him to say that the demonstrations should be peaceful and urged against violence, and he simply refused to do it. That’s going to be a key component of any prosecution: What was his state of mind? And he basically said, according to Hope Hicks, “I have no legacy unless I win. It’s all about winning.” The DOJ will point out, it is not all about winning; it’s about democracy and following the will of the voters.

GAZETTE: Based on your reading of the executive summary, does it appear possible there may be key information that hasn’t yet been revealed, such as evidence of people high up in the administration who may be cooperating with DOJ, co-conspirators whose identities are withheld so as not to harm potential prosecution?

People who end up cooperating, particularly if they cooperate late in the game, frequently have to agree to plead guilty to something in order to not be charged with more serious crimes. So that’s also a frequent outcome. Those discussions between potential witnesses and the Department are almost certainly going on. The committee typically would not have information about those critical negotiations.

“What the committee worked hard on is to talk to people around Trump to address issues concerning what was his state of mind, what was he intending to do?”

GAZETTE: Would a different set of lawmakers from another era, say 100 years ago, look at this same evidence and come to these conclusions or is this indicative of where we are right now as a country?

EGGLESTON: I think it’s too easy to say that we’re here because of partisan differences. There are a couple of Republicans on this committee. It’s pretty clear what happened: President Trump lost; he denied that he lost; he tried to go to court; he was unable to adduce any evidence that there had been any fraud that impacted the election. Various state certifications took place in December. He tried to keep them from happening through a variety of different ways — all that failed. And really, his last hope was to get the mob to keep Congress from certifying the election or, at the very least, pressuring Vice President [Mike] Pence into refusing to certify the election, and there was no grounds for that. So what happened seems pretty straightforward to me.

What the committee worked hard on is to talk to people around Trump to address issues concerning what was his state of mind, what was he intending to do? What did he know about the status of voter fraud? What were his intentions in the days leading up to Jan. 6? What was his intention when he gave the speech? That’s where, if there’s an indictment, a trial will play out. That’s really where the committee focused its attention — what was the president was thinking as he was going through those various episodes. That’s the evidence the committee put forth in such great detail in their executive summary.

GAZETTE: The committee reportedly disagreed over what to highlight in the report. For example, the intelligence and security failures on Jan. 6 got little attention during the hearings. Are we likely to see new important revelations in the full report?