What is case for prison abolition? 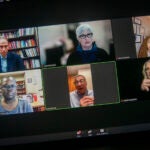 Striving for impassioned, but reasoned, post-Roe conversation on abortion

Tommie Shelby, who has dedicated his career to thinking about questions regarding race, Black political thought, and social theory, was intrigued by the prison abolition movement of recent decades and wondered whether he should be part of it.

But the Caldwell Titcomb Professor of African and African American Studies and of Philosophy was bothered by the sense that he didn’t have a firm grasp on its underpinnings. So he set himself the task of working through the major arguments in favor of abolition, including incarceration’s ties to slavery, racism in the prison system, various inequities in the justice system itself, and the prison industrial complex, and chronicled that journey in his new book, “The Idea of Prison Abolition.”

“I’m a philosopher, only by training, but that’s how I see my role in the intellectual world. Most of my work is an attempt to philosophically reflect on various aspects of Black life,” Shelby said. He noted that he isn’t an activist advocating for a specific cause but “a person interested and curious about the movement and its ideas, who wants to critically reflect on their main arguments, [and] to decide whether I should be a part of it.”

Ultimately, the self-described defender of radical reform arrived at a more nuanced conclusion: that both prison reformers, who seek to improve the system, and abolitionists, who call for ending it and adopting alternatives, should share a common goal: “to fundamentally change the social conditions that so often give rise to the need for punitive incarceration.”

“I’m hoping people approach the question in much the same way I did when I was on working on it, which is to take seriously abolitionist objections to the practice of imprisonment, even if they ultimately don’t agree.”
— Tommie Shelby

A starting place for Shelby was the life and writings of renowned academic and activist Angela Davis, one of the founders of the movement.

“I wanted to think about her early engagement with the prison and the political context that came from. And that was a context of participating in a left wing, Black Power way of engaging with issues of race and class,” Shelby said.

Many of Davis’ earliest engagements with prison abolition dealt with freeing individuals she considered political prisoners in the 1960s and ’70s, people she believed had been caught up in the criminal justice system, often under false pretenses, to undermine the Black revolutionary movement. Shelby was inspired by Davis’ writings from the 1970s, as well as those of political activist and writer Assata Shakur, a former member of the Black Panthers and Black Liberation Army who likened life in a disadvantaged, or “ghetto,” neighborhood to that in a minimum-security prison. There is often a flow between those disadvantaged communities to prison and back, Shelby noted.

Shelby studied several other Black radicals of the time, including Huey Newton, to further his exploration into political prisoners. Newton regarded himself as such and wrote extensively about his time being incarcerated. In his book “Revolutionary Suicide,” the Black Panther Party founder examined the similarities between enslavement and imprisonment, including the lack of freedom of movement, total power by prison authorities, and constant surveillance. Shelby then applied those arguments about political prisoners to residents of these neighborhoods and proposed a third type of political prisoner, the rebellious resident.

“Those who refuse to participate in the licit economy on the grounds that to do so would be degrading or exploitative often have great difficulty raising sufficient funds to move to better neighborhoods, particularly if they abstain from preying on other disadvantaged members of their community,” Shelby wrote. “Their unwillingness to accept whatever jobs are available is ‘punished’ with an impoverished and segregated existence.”

Shelby also explored Davis’ steadfast belief that slavery continues to live on in contemporary institutions, both in prison and in the death penalty. Following her own incarceration at Marin County Jail in connection with her alleged involvement in a deadly courthouse escape, Davis has argued that prisons in the U.S. are dehumanizing and linked to the practice of slavery “in ways that make imprisonment deeply objectionable, and particularly intolerable for African Americans,” Shelby wrote.

Shelby said there may be points of comparison between the institution of slavery and that of imprisonment, but they are not the same thing, and the issues are thorny and fraught. He noted that many question labor practices within the context of incarceration, including whether individuals who are imprisoned should work, how much they should get paid if they are required to work, and who benefits from that labor. Those questions are further complicated when one includes community service as a form of punishment, Shelby said.

Shelby said he does not consider himself a radical abolitionist, though there is plenty to be learned from them. “I do think prisons, under certain circumstances, can be a socially necessary and a morally justified way of responding to harmful wrongdoing,” he said. “But I think that abolitionists are right that we should aspire to not rely so heavily on the practice of imprisonment and ideally not rely on it at all.”

He hopes the book helps others who are still trying to decide whether they support prison abolition over criminal justice reform.

“I’m hoping people approach the question in much the same way I did when I was on working on it, which is to take seriously abolitionist objections to the practice of imprisonment, even if they ultimately don’t agree,” Shelby said.