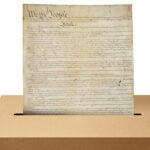 Known for his acerbic wit and sharp commentary on the day’s political news, comedian Jon Stewart has also proven a remarkably effective and relentless advocate for Sept. 11 victims and veterans.

Stewart, who hosted “The Daily Show” on Comedy Central from 1999 to 2015, worked alongside activists to help push through federal funding to compensate families who lost loved ones in the terrorist attacks, first responders left with 9/11-related ills, and other victims over the past two decades. Last August, he helped shepherd passage of the Honoring Our PACT Act of 2022, a law that extends health and disability benefits to veterans who developed diseases like cancer or respiratory illnesses after being exposed to toxic burn pits while serving overseas.

Students packed into the Harvard Kennedy School Forum on Friday afternoon to hear a sometimes salty Stewart tell moderators Soren Duggan, M.P.A. ’23, and Grace Park, M.P.P. ’23, both U.S. Army veterans, about first becoming interested in these issues after seeing the difficulties so many 9/11 first responders and volunteers had getting health care and other critical needs met in the years after the attack and trying “to turn that fury into something positive.”

As an Iraq War opponent, Stewart said his desire to better educate himself on the U.S. military led him to Walter Reed National Military Medical Center, where he met and spoke to wounded veterans for the first time in an extended way.

“Spending time with them, I got to really see their sacrifice, but also their quality. I think it actually angered me more to understand that,” he said.

“The human capital that we expend in the military is enormous, and once you begin to recognize that, you become even more certain that the decisions that are made that affect their lives and their families’ lives are sometimes made frivolously, and without concern for the cost of that human capital,” said Stewart, who now hosts “The Problem with Jon Stewart” on AppleTV+.

At Walter Reed, he saw veterans suffering from a host of mental and physical challenges as a result of their service to the country, including many who had been exposed to smoke from fuel, metals, and other toxic military refuse that burned 24/7 in pits run by contractors working for the U.S. government. For years, most veterans had not been getting the medical treatment and support they needed, something Stewart still finds bewildering.

“It’s the lowest-hanging fruit of a society — to be able to take care of the basic needs of the most venerated individuals in our society, who are suffering because of the heroism and sacrifice that they gave to this country,” he said. “If we can’t do it for them, what chance do the rest of us have?”

Stewart said it has been “heartbreaking” to lose some of the people he’d come to know and love over the years working on these issues, but also inspirational to watch those who knew they were gravely ill and had only the briefest of time left choose to spend some of it advocating for others.

“To see people spending this incredibly valuable asset, which was time, it was the most valuable thing that they had, to see them spending that in service of making sure that others wouldn’t face the devastating road that they faced — that kind of selflessness informs and humbles anything else that that you can do,” he said. “I think for me, that’ll always be the honor my life.”

Stewart was asked why the U.S. government shielded contracting firms that operated burn pits from legal liability yet left its military veterans to fight on their own for help. He said, “We are getting the outcomes that we get because the system is designed for those outcomes. You have to design a better system. That’s your charge in this world.”

Stewart said that his frequent criticism of the media and how and what gets covered stems not from cynicism, but from “idealism tempered by disappointment.”

“Cynicism is a feeling of ‘Ehh, who cares? It doesn’t matter. It’s all broken.’ Idealism tinged with disappointment is — you have a [expletive] opportunity, you have a mechanism … that can help us. Help us!”

For Kennedy School students who will go on to be policymakers, he advised them to use the media’s obsession with drama and stars against it, and try to connect policy ideas to people and the problems in the world that they’re trying to fix.