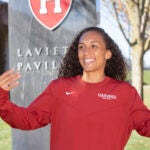 Christina Maranci, the new Mashtots Professor of Armenian Studies, has big plans. The first person of Armenian descent to hold the position, which is shared jointly by the departments of Near Eastern Languages and Civilizations and History of Art and Architecture, Maranci is bursting with ideas for introducing Armenian art and culture to a wider Harvard audience. She spoke to the Gazette about her work in Turkey, the discovery of her culture, and the cultural richness of the Greater Boston Armenian community. Interview was edited for clarity and length.

GAZETTE: Tell me about your connection to Armenian culture.

MARANCI: I grew up in Connecticut, not far from New York City, and there weren’t many Armenians in my town. My parents loved and still do love European culture — classical music, ballet, opera — and they were very interested in sharing that with us. We also went to Armenian church.

I became really interested in medieval art and art history in college. I slowly found myself groping eastward to Byzantium and then, ultimately, to my own homeland and its traditions. It was a slow process. Whereas I had planned to study high Gothic architecture, I ended up working on Armenian art and architecture.

GAZETTE: Why is Armenian architecture important?

MARANCI:  There was an argument that Armenia was the cradle of Gothic architecture in Europe. That position isn’t held anymore, but Armenian architecture from the 10th and 11th centuries is striking for its aesthetic values. You see verticality and clustered columns and pointed arches and many of the things that you have in Europe, but this is a different tradition and one that that can be and should be understood in its own context.

When you study the Armenian highlands before Christianity, you see what would be, in an art history textbook, tidied into different chapters: Ancient Near East (Persepolis) or Hellenistic sculpture. But what’s so interesting in Armenia is that we can find evidence that points to both traditions.

Artifacts excavated from the ancient Armenian highlands point both to classical Mediterranean traditions (such as a figurine of a goddess in contrapposto and sculpted with the wet drapery technique) as well as objects that point to Ancient Persia (a silver rhyton in the shape of a horse and rider bearing striking similarity to the sculpted figures of the staircase at the audience hall of Persepolis). This means that the corpus of archaeological material does not fit tidily into conventional categories of art history, but rather crosses them, making Armenia a very unruly place to study, which is interesting and also challenging.

GAZETTE: The local Armenian community helped establish your professorship in 1959. What is your involvement with them?

MARANCI: My husband, who’s also Armenian, goes to the Holy Trinity Armenian Church on Brattle Street and sings, so I sometimes go with him. But there are also great centers for study in the area, such as the National Association of Armenian Studies and Research (NAASR), which was closely involved with the establishment of this chair. I’ve been a member since I was a graduate student. [A Vassar alumna, Maranci got her M.A. and Ph.D. at Princeton.] NAASR is located in Belmont, and it’s a great resource for scholars, students, and the community. There is also the Armenian Museum in Watertown, which holds an important collection. This area has a rich Armenian community, second only in the United States to Los Angeles.

GAZETTE: Would you tell us about your work with at-risk sites in Turkey?

MARANCI: There are many Armenian churches in Eastern Turkey, part of the historical territories of Armenia, but they are mostly in fairly desolate places and in various states of disrepair. I work with the World Monuments Fund in New York City, and in turn we work together with the Ministry of Culture and Tourism of Turkey as well as other ministries to call attention to these churches and to, ultimately, stabilize them.

The area I study is on a closed international border and home to beautiful and important historic churches. One of them is 19-sided and has lost half of itself: It’s basically a cross-section of its original form. Working on such churches is very complicated from many perspectives: political, diplomatic, engineering, and economic. It’s a game of patience, and at the same time they’re in really dire condition — and, on top of that, the area is highly seismic.

This material is great to teach with because it shows how medieval monuments are caught up in so many different spheres of inquiry, from art history to human rights, international law, politics, not to mention history and religion.

GAZETTE: What are your plans for Armenian studies here?

MARANCI:  I want to build undergraduate interest, but I also want to attract and train M.A. and Ph.D. students. I want to create a Gen Ed course on the art and culture of Armenia in order to raise awareness of this extraordinary tradition that doesn’t usually get studied. Undergraduates aren’t exposed to it, and yet Armenian art and culture is connected to so many different cultures, from Amsterdam to the Philippines. It’s just an extraordinary story to tell. I need to find a snappy title for it!