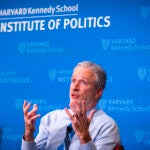 One of the many factors contributing to increased polarization and the global weakening of democracies over the past decade is how effective populist demagogues are at using social media, according to a cognitive scientist who studies online misinformation.

Lewandowsky discussed populist demagogues’ techniques as well as his latest research on the divergent ways U.S. congressional Democrats and Republicans used Twitter during the Trump administration at a Shorenstein Center talk Nov. 16 at Harvard Kennedy School.

The brouhaha over former President Donald Trump’s 2017 inauguration crowd size is a good example of how demagoguery works on human cognition, he said.

Despite clear visual evidence to the contrary, the new president and his press secretary, Sean Spicer, insisted that the crowd had been larger than the one at President Obama’s inauguration in 2008. In a series of experiments done not long after, voters were shown photos side-by-side of the two inaugurations and asked to identify which crowd was larger. Hillary Clinton voters and non-voters overwhelmingly chose the Obama photo. Between 11 percent and 26 percent of Trump voters chose the Trump photo.

It’s not that these voters couldn’t discern the obvious crowd size difference. It’s that their choice was an act of “participatory propaganda,” Lewandowsky said, a way of expressing their support for their champion in the moment.

Often, skilled demagogues will lie and then increasingly demand loyalists embrace the assertion as a show of political support. Populist demagogues often reframe the world in binary terms, labeling lies and corruption traits of “The Elites,” and truth and fairness traits of “The People,” so “their lies become a signal of authenticity” to the public and accepting the lies becomes a “signifier of tribal identity,” he said.

Lewandowsky has studied how people’s brains “update” their memories to integrate new information about things they believe to be true but turn out to be false, as well as which variables determine whether people accept scientific evidence related to vaccinations or climate science. That work led to an interest in the persistence of misinformation in society and how it is spread.

He said the most effective demagogues successfully harness social media to not only communicate with their supporters, but to shape the coverage decisions of news media, highlighting and burying stories to their benefit.

The former president was especially skilled in this area, he said.

Trump critics accused the mainstream media of showering the former president with unwarranted coverage in the hope that whatever he did or said on Twitter and elsewhere would prove controversial and draw attention or out of fear of being left behind if they failed to cover him.

When negative news stories about him surfaced, like a $25 million fraud settlement with the state of New York over Trump University, Trump would typically tweet dozens of times in a single day to divert attention from unflattering coverage, a strategy Lewandowsky called “systematic shiny objects.”

Lewandowsky detailed how Democrats and Republicans in Congress communicate on Twitter, and the information they share differs significantly.

Lewandowsky and his team recently studied 1.6 million tweets (from more than 1,000 unique Twitter handles) sent by every member of Congress between 2016 and 2020. They analyzed the language choices used and the links shared to more than 160,000 articles. The sources for those articles were checked against a rating system by News Guard, which evaluates the journalistic credibility and trustworthiness of internet domains (not individual articles).

When congressional Democrats and Republicans used words like “evidence” and “facts” in their tweets, a style Lewandowsky calls “truth-speaking,” they shared more accurate information. But when they used words like “common sense” or “opinion,” a style he refers to as “belief-speaking,” their paths diverged. When Democrats used these types of words, it was not accompanied by an increase in the sharing of false or misleading information on Twitter. But for Republicans, the more they engaged in belief-speaking, the less accurate the information they shared.

“For Republicans, the use of belief-speaking is a marker of whether or not they’re likely to share something that’s accurate,” he said.

Their research has found “fairly strong evidence” that regardless of party affiliation, the speaking style used in a tweet dictates the type of public reaction it will generate.

“So, leadership matters,” he said. “Leadership can determine the tone of the conversation and the public will follow suit.”