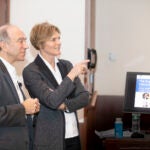 Even the biggest loser (at least to some) of last week’s midterm election was a surprise.

“The 2022 midterm election was expected to be a referendum on Joe Biden. It’s closer to say it was a referendum on the Supreme Court, and the Supreme Court lost,” said William Galston, a liberal political theorist, Brookings Institution senior fellow, and Wall Street Journal columnist, during the Program on Constitutional Government’s biennial post-election breakdown, co-sponsored by the Center for American Political Studies.

Galston was joined in the Thursday discussion by conservative journalists Ramesh Ponnuru and Bill Kristol ’73, M.A. ’76, Ph.D. ’79, in trying to make sense of what all agreed was a “crazy” and “remarkable” midterm election.

Pre-election polls had many expecting a nationwide “red wave” of Republican victories, with voters blaming President Biden and the Democrats for the economic pain brought by surging inflation. Instead, Democrats held on to the U.S. Senate, and control of the House of Representatives, while still not fully settled a week later, is likely to yield only a narrow majority for the GOP.

One key reason is reflected by exit polls nationwide, which showed that the percentage of people who said inflation and abortion were key was nearly equal. In swing states like Michigan, voters cited abortion (45 percent) over inflation (29 percent) as a top concern in exit polling. The “near parity” in these numbers is a “substantial” part of why everyone has been so surprised by the fizzled Republican showing, said Galston.

Democrats also fared much better with voters who were “lukewarm” on Biden’s performance or the direction of the country, but not “angry” enough to vote for the Republican candidate, said Galston.

Kristol was an early “red wave” skeptic. He attributed the incorrect predictions by the media and others to the relative youth of so many influential political analysts and opinion-makers who have only ever experienced “wave” midterm elections.

“They took what is a real historical trend, no question about it, as if it were somehow inescapable and forward aimed,” said Kristol, editor at large at The Bulwark and founder and longtime editor of The Weekly Standard, a now-defunct, neoconservative magazine.

Kristol co-founded the Program on Constitutional Government in 1985 with panel moderator Harvey Mansfield, William R. Kenan Jr., Professor of Government at Harvard and the program’s current director, as a venue for political theory and debate.

With two elections in a row with very similar results, 2020 and 2022, this midterm was neither a repudiation of Biden nor of the Republican Party. And while many of former President Donald Trump’s preferred candidates lost, even he suffered more of a “setback” than a “massive repudiation,” Kristol added.

Election deniers “had a bad night,” but Republican incumbents did well for the most part, which also bolsters the case that this was not a change election, said Ponnuru, editor of the National Review and nonresident senior fellow at the American Enterprise Institute, a conservative think tank.

Republican governors who pushed through anti-abortion legislation didn’t seem to pay a price, and demographic groups who were expected to rally in opposition to such legislation, like unmarried women, turned out in similar numbers as in 2018, leading some to argue the abortion effect may be somewhat overstated, said Ponnuru, a CNN contributor and Bloomberg Opinion columnist.

Candidate quality coupled with concerns about democracy had an impact in many races, even those that Republicans won easily. “It does seem to me that the deeper a candidate in a competitive race was into Trump’s nonsense about the 2020 election, the worse they did,” he said. Even Republican J.D. Vance, the Trump-endorsed candidate who beat Democrat Tim Ryan for Ohio’s open Senate seat, did significantly worse than other major Republican candidates on the ticket who won their races, including the state auditor, Ponnuru noted.

These voters very easily might have chosen Republicans given the set of issues they cared about, had the party fielded different candidates.

“This is a group of voters that is cross-pressured. It doesn’t want to vote for Democrats necessarily, but the Republicans have to pass this minimum threshold of acceptability, and too many of them decided to light themselves on fire instead,” Ponnuru said.

The Democrats’ showing instantly relieves potential pressure on Biden to step aside and let other more promising candidates run in 2024, and likely squashes the possibility that anyone will try to challenge him in a primary. Many in the party were “locked and loaded” to attack an abortion-focused strategy if things had gone badly, said Galston. That won’t happen now. Democrats may even gain some strength as a result, but need to avoid going too far.

“The fact that the Democrats were on the winning side of what turned out to be the core cultural issue in this election does not mean that they will be on the winning side of all the other cultural issues that many Democrats like to push, but overreach is us,” said Galston, a veteran of six Democratic presidential campaigns who served as President Bill Clinton’s deputy assistant for domestic policy from 1993 to 1995.

Galston said with gubernatorial victories in key swing states including Wisconsin, Michigan, Pennsylvania (and Arizona on Monday night), the Democrats will not have to face the kinds of concerns that could arise from having election fraud conspiracists in those top jobs in 2024. Even the win by Georgia Gov. Brian Kemp, a Republican, who rejected Trump’s effort to overturn the 2020 election, will help Democrats fend off a repeat of 2020 election conspiracy unrest.

Heavy losses for Democrats in Florida, Texas, and Ohio offer “substantial clarification” of the Electoral College map heading into 2024, said Galston, with both parties likely to focus their energies primarily on the upper Midwest states, along with Arizona and Georgia.

Looking ahead, Kristol said whether the GOP abandons Trump in favor of Florida Gov. Ron DeSantis or another candidate in the wake of last week’s poor showing is still unclear and will depend largely on whether a critical mass of Republicans speak out against Trump and urge voters to move on in the coming months, a prospect that’s not at all certain.

Despite the boost Biden will get from the Democrats’ strong showing and Trump’s telegraphed announcement of his plan to run, Kristol said he still believes the nomination of both parties is “very much up in the air.”

He said that of the four possible 2024 matchups — Trump vs. Biden, Trump vs. some other Democrat, Biden vs. some other Republican, a race with neither Biden nor Trump — the “best thing for the country, in my view, would be Non Biden-Non Trump. That’s the least likely of the four.”

“The worst thing for the country in my view would be Biden vs. Trump, and that’s the most likely outcome.” 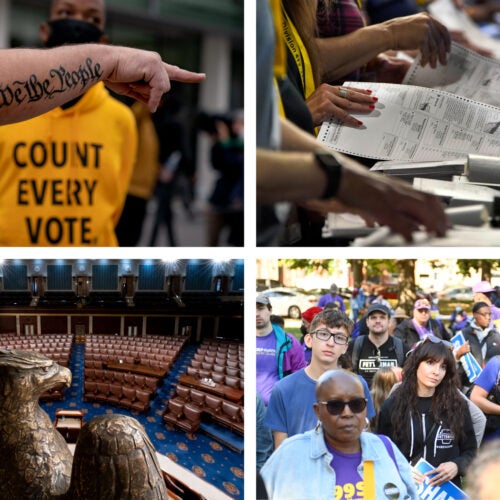 Where are we going, America?

Days before the midterms, we sat down with three scholars for a conversation about U.S. democracy. The mood was anxious. 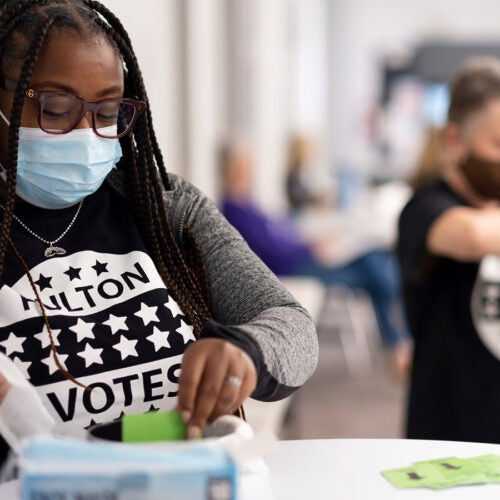