‘We can be better than this’ 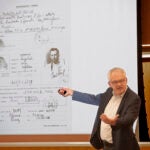 Gift given, one left behind

Stressing the centrality of hope and “having the hard conversations,” Freeman A. Hrabowski III, president emeritus of the University of Maryland, Baltimore County (UMBC), gave the inaugural Martin Luther King Jr. Commemorative Lecture at Sanders Theatre on Wednesday evening.

Sixty years after King spoke to Harvard Law School students about “The Future of Integration,” Hrabowski discussed his own history with the Civil Rights leader as well as the ongoing struggle to bring equity and inclusion into academia, particularly science, engineering, and technology.

Harvard chief diversity and inclusion officer Sherri Ann Charleston and President Larry Bacow introduced Hrabowski and later presented the educational advocate with a statuette commemorating the occasion. “He treats others with great care and curiosity. He nurtures talent into leadership. Most important, he leads leaders,” Bacow said. “This is a man who not only speaks truth to us today but who has spoken truth all his life.”

Hrabowski began his lecture by tying the present day to the past. “My students often say things have never been this bad. I respond, ‘Let’s go back to the ’60s,’” he said. Noting that he could be talking about “the 1860s or the 1960s,” he harkened back to King’s time, saying, “Those of us who know that period must tell our stories.”

Hrabowski then recounted being a 12-year-old in Birmingham, Alabama, in 1963, the year after King’s Harvard speech. King and other Civil Rights leaders were recruiting children to brave police batons, attack dogs, and blasts from fire hoses and march to protest segregation in Birmingham. “All of America will know that even our children know the difference between right and wrong,” Hrabowski recalled King saying. Although he was at the time a self-described “math nerd,” who wanted nothing more than to work on complex problems, he joined the more than 1,000 young people in the demonstration, which was dubbed the Children’s Crusade. “I did go,” he said. “I did march.” Despite the protestors’ youth — they were 8 to 18 years old — hundreds were arrested. “I spent five horrible but empowering days in jail,” Hrabowski recalled.

What that moment did, he said, “was say, ‘We can be so much better than this.’” Hrabowski went on to pursue his love for mathematics, receiving a bachelor’s degree with highest honors from Hampton University in Virginia at 19 and a master’s in mathematics and a Ph.D. in higher education administration and statistics at the University of Illinois at Urbana-Champaign. But throughout his career, including his 30-year tenure at UMBC, he worked for increased representation in education and the sciences, including co-founding the Meyerhoff Scholars Program, which identifies and supports minority high school students with an interest in STEM (science, technology, engineering and math). In 2022, the Howard Hughes Medical Institute launched the Freeman Hrabowski Scholars Program, pledging $1.5 billion to support scientists of color.

The goal, Hrabowski said, is collective action for collective empowerment. “Even as we commemorate Dr. King, it’s not about one person,” he said. “It’s not about me; it’s about us.”

Calling out other civil rights leaders, from President Barack Obama to Supreme Court Justice Ketanji Brown Jackson, Hrabowski made special note of activist Bob Moses, M.A. ’57, founder of the Algebra Project, which brought mathematical literacy to underserved public school students. “He saw math as the ability to think logically and critically and, therefore, that it was a civil right.”

The role of higher education, and of Harvard in particular, is to continue such work. “We must speak out and say what is acceptable and what is not,” Hrabowski said. “Violence and discrimination are not acceptable.”

Hrabowski praised Harvard’s initiative to acknowledge the role of slavery in its history but called for the University to go ever further. “The act of restitution is hard work,” he said, warning that the road ahead will require perseverance and commitment. “I challenge you to work on undergraduates getting Ph.Ds. I want you to be No. 1 in Black students getting Ph.Ds. in the natural sciences.”

The key, he stressed, is communication. Harvard and other institutions of higher learning must “make sure we’re listening to the voices of the undergrads and the graduates,” he said. Essential, he said, is “the courage to listen even when people say things we may not want to hear.”

The event concluded with a question-and-answer period led by Azariah Boyd, a master’s degree candidate doing work in environmental epidemiology at the Harvard School of Public Health, and Travis Johnson ’24, student body co-president and a government concentrator.

At one point Hrabowski reminded the audience of King’s famous quote about how the arc of the moral universe may be long but ultimately bends toward justice. To that Hrabowski added a corollary: “It does not bend by itself. We have to be the ones to do the bending.

“This period is as critical to the future of democracy as any in the history of our nation,” he said. Recalling King’s words to the children in Birmingham, he stressed, “We must not give up hope. We must continue to fight for justice.

“I want you not to be cynical. I want you think of Dr. King continuing to have his dream. We can be better than this.”