How to protect democracy? Don’t give up on your neighbor. 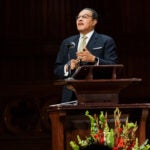 ‘We can be better than this’

‘Persuaders’ can inspire Americans to engage with one another and step back from growing threat to country’s future, Radcliffe fellow argues

At a time when U.S. neighborhoods are segregated by politics and different news sources shape views of different issues, many Americans see some among their fellow citizens as lost causes who aren’t worth engaging in political discourse.

Wrong, says Anand Giridharadas. In his new book, “The Persuaders: At the Front Lines of the Fight for Hearts, Minds, and Democracy,” the Harvard Radcliffe Fellow argues that debate is a bedrock principle of democracy that we cannot afford to abandon in the face of anti-democratic threats.

Giridharadas spoke to the Gazette about the book and what he’ll be working on as 2022-2023 Perrin Moorhead Grayson and Bruns Grayson fellow at Radcliffe. He will speak with Deval Patrick, the former Massachusetts governor and now co-director of the Center for Public Leadership at the Kennedy School, on Wednesday at the Brattle Theatre. The interview has been edited for clarity and length.

GAZETTE:  Why is persuasion such an essential part of democracy?

GIRIDHARADAS: For most of human history, the dominant idea of how to make decisions about the future was that kings and queens and emperors and tyrants should do it. It was too hard, too complicated, too messy to let all of us make the future through debate and conversation and choice. In the last few hundred years, there was a radical turn where it became the dominant view that it is best when we make the future — people make the future — through debate and discussion and argument and then, acts of choosing. And that these decisions are better made, and certainly more legitimately made, when everybody gets a say in them.

Right now we are at a moment when we are backsliding from that democratic consensus. We see a fascist threat rising on the right. The political right in the United States is essentially now a fascist movement: There’s a belief in overturning elections, discounting the will of the people that way; there is a belief in political violence as a legitimate tool of achieving your ends. But also, more subtly throughout the culture, rather than on just any one side, there is a kind of great write-off, where people generally assume that people who disagree with them or are on other sides of various divides are irredeemable, are monolithically committed to those views, and never going to change. We have come to a crisis of persuasion that is, in many ways, a crisis of liberal democracy. If we as society lose faith in the idea that we can change things by changing minds, that we can make the future by arguing and haggling and having it out with each other through words and votes, then we’re essentially asking for civil war, we’re asking for tyranny, we are asking for these decisions to be made for us.

I became very alarmed by what seemed to me was the rise of a kind of anti-persuasive culture — this idea that we will never be able to change those who disagree with us — and decided to spend time with a bunch of people who have refused the great write-off, organizers and activists and people in politics who are still committed believers in persuasion and changing things by changing minds.

“The fundamental incentive of social media is toward the inflammatory rather than any kind of bridge-building or empathetic response.”

GAZETTE: What’s driving our willingness to write each other off so quickly?

GIRIDHARADAS: Social media is a very big part of the story. The fundamental incentive of social media is toward the inflammatory rather than any kind of bridge-building or empathetic response. It’s inspired many of us, myself included, to rely on shame and peer pressure as political modes in ways that have no basis in evidence as being effective. It also has to do with billionaire-owned media that, in a different way, has profited from division.

There’s also the fact that a politics of civility and comity and having faith in the other side has not really delivered much if you’re under 40. There’s a reason you see Gen Z and millennials turning away from those political values. I think there is also a sense that there are very wealthy and powerful people, which is what I wrote about in my previous book, who are hell-bent on grabbing more and more wealth and power who have done so incredibly effectively. Appealing to kindness is simply not adequate to the kinds of depredations of that group. So, for a lot of reasons, you have a more strident political culture, a more confrontational political culture.

GAZETTE: Which strategies and techniques of persuasion are most effective at cutting through the noise?

GIRIDHARADAS: One of the most interesting myths is that persuasion has grown impossible. It is certainly true that political persuasion is harder in an age of polarization. The number of people who flip back and forth, certainly between the parties, is lower than at other moments in history. However, on issue after issue, there is well-documented evidence that a significant number of people, enough to make an enormous difference in the shape of your life and my life, are changing their minds all the time about all kinds of things. Donald Trump won the first time and lost the second time. You can say “Everyone who voted for him is this” or “Everyone who voted for him was that.” I said as much of that stuff as anybody. But it is a fact that some people liked him the first time, didn’t like him the second time. What a lot of organizers are showing is that there is still room to move significant numbers of people — maybe not half the population, but 5, 10, 20, 30 percent of people — on certain issues.

Here’s some of what I learned that the pro-democracy movement needs to pick up and embrace. One is meeting people where they are. Having more space in movements for people who don’t fully get it, who don’t use the right terms, but their hearts are in the right place. Who, frankly, are suspicious or nervous about some of the ideas they hear from portions of the pro-democracy side, but who like overt racism and white nationalism even less. We’re often more interested as a movement in policing their entry, rather than saying, “Come on in.”

Secondly, I think the pro-democracy side needs to be more conflict-prone, more willing to pick fights. The idea of going high when they go low has been a disaster. What you see in folks like [California Gov.] Gavin Newsom and others is the hunger a lot of Democrats have to see candidates who are able to pick fights and name villains when there are villains. It’s OK to be a little angry and mix it up a little bit for the sake of making people’s lives better.

GAZETTE: Both Democrats and Republicans are telling prospective voters that democracy is on the ballot in November because of the actions of the other party. Is that accurate? How do you see the midterms shaping up?

GIRIDHARADAS: Just because both sides are telling you the other side is going to end democracy doesn’t mean both sides are going to end democracy. There may be people who are excited, committed fascists in the leadership of the Republican Party and others who are just ’fraidy cats. But it doesn’t really matter if no one is advocating for the view that elections are things that cannot be overturned and political violence is something that plays no part in politics.

And so, the burden for the left, and for the pro-democracy side right now, is immense. It is running to sustain the idea of democratic life — of liberal democracy itself. And my concern at the heart of this book is that it is not up to the task as it now stands. It has the right ideas; it has many of the right policies; it has its heart in the right place. But there is a moral complacency. No matter how righteous you think you are, no matter how much you may be on the right side of history, it is not enough to be right about the future — you have to sell it, especially to those who are skeptical. And what I see is a pro-democracy movement that is not even turning on many of the key engines of persuading people. They’re not even really competing.

GAZETTE: What will you be working on at Radcliffe this year?

GIRIDHARADAS: All my books are based on my own reporting. It’s exciting to have that first-person connection to subject matter, but it also limits the range of what you can cover. So, I am attempting something very different. It’s the seed of a book, but who knows? Maybe an art project, it may be a documentary. I don’t know the final form it should take. But it’s an attempt to take a more complex, variegated biopsy of the American body politic in this moment of confusion and fracture and pain and aspiration.

Part of the angry, confrontational, polarized culture we have gotten into is that it makes us forget the complexity of people. It causes us to think of other people as facilely being one thing, having one story. But it’s almost never true and it diminishes our political possibilities when we start to assume that there’s only one story about people. I’m trying to do a project that showcases how complicated people are, different Americans who, in a conventional way, would seem to be on different sides of an issue, but in fact may have more common than we’d think. 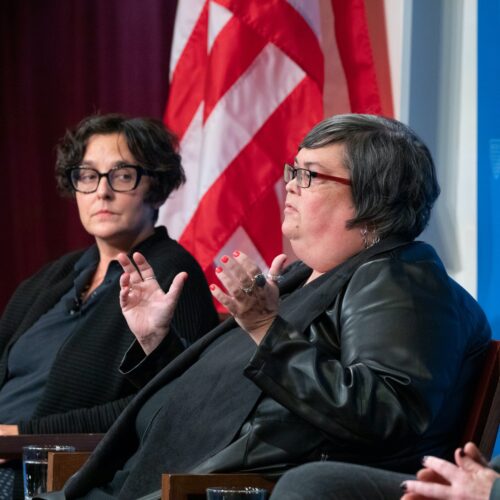 How to save democracy

Events examine what can be done to address grinding problem of race, internet’s power to exploit political, cultural schisms to destructive ends 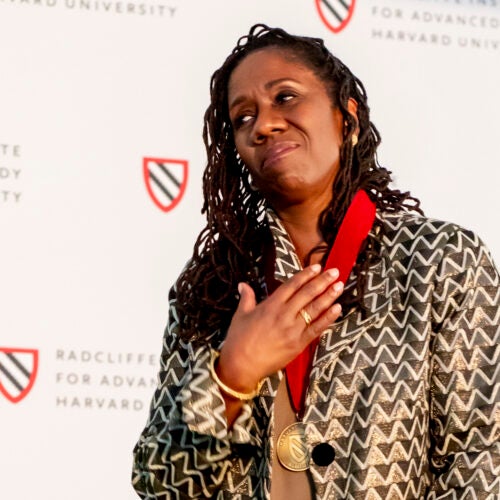