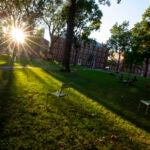 Honored with ‘genius’ grant for ingenuity, promise in number theory

Melanie Matchett Wood ignored the unknown number blowing up her phone all day. The callers, representatives from the John D. and Catherine T. MacArthur Foundation, persisted, finally reaching the Harvard mathematician after she put her two children to bed.

Wood, who regularly serves on nominating committees and consults on best practices for selecting scholars for awards, was surprised to suddenly find herself the center of attention as a 2022 MacArthur Fellow.

“It was a big shock,” said Wood. “Only a handful of mathematicians ever get this. It was certainly not something on my radar.”

MacArthur Fellowships are awarded each year to 20-30 “talented individuals who have shown extraordinary originality and dedication in their creative pursuits and a marked capacity for self-direction.” This year there were 25 winners of the so-called “genius” awards, which come with a stipend of $800,000.

Wood is being recognized for addressing foundational questions in number theory, which examines the properties and relationships of numbers. Her work centers on using ideas that come from seemingly unrelated branches of mathematics — like topology — to illuminate prime numbers and factorization.

“Only a handful of mathematicians ever get this. It was certainly not something on my radar.”
— Melanie Matchett Wood

“As mathematicians or number theorists, we think of prime numbers as being the building blocks of the whole numbers because you can form all the other whole numbers by multiplying primes together,” Wood said. “A big focus of my work is trying to understand what happens to prime numbers in larger numerical systems. As you enlarge these number systems, I’m interested to what extent primes factor and how often which ones do and in what ways. People have been studying these kinds of questions for a very long time and there’s still a lot of questions we don’t know the answers to.”

Wood takes special pride in what the prize signifies for mathematics.

“This award is associated so much with creativity and with people who have original outlooks,” Wood said. “I feel like there is a lot of creativity happening in mathematics and that’s not always seen. It’s particularly important to me that this is recognizing that to solve hard math problems one really needs the kind of originality that this award celebrates.”

Wood, who joined the Department of Mathematics in 2020, is also a Radcliffe Alumnae Professor and a 2022-2023 fellow at the Harvard Radcliffe Institute. She is the sole Harvard faculty member among this year’s MacArthur recipients. Other winners include Danna Freedman ’03, now an inorganic chemist at MIT, and Emily Wang ’97, a Yale professor of medicine and public health.

“Melanie Wood is a versatile mathematician, able to make deep contributions to a range of fields,” said Michael Hopkins, George Putnam Professor of Pure and Applied Mathematics and department chair. “Her most recent work, on the statistics of fundamental groups of three manifolds, is a dazzling combination of geometry and algebra. Though she has only been here two years — one of which was remote — her wonderful mathematics and her commitment and accessibility to students have contributed to a sense of rejuvenation in our department. She is an inspiration to us all.”

A native of Indianapolis, Wood showed a talent for math early in life. In the seventh grade, she won a citywide math competition for middle schoolers. She took first in the statewide contest that same year and placed 40th at the national level. The next year, she placed 10th among American middle schoolers. At 16, Wood became the first female to make the U.S. International Mathematical Olympiad Team. She won silver in 1998 and 1999.

The Olympiad experience exposed her to questions she hadn’t been taught in school, feeding her interest in math.

“You just had to try some things and figure it out yourself,” she said. “Some of the things you tried might work, but some of them wouldn’t or maybe would work only a little and then you needed a new idea. That was the seed that really got me so interested and that’s the part of mathematics that I love — the puzzle-solving aspect, the way that you need to figure out a new way of looking at things to do something.”

That passion for problem-solving inspired Wood through her undergraduate years at Duke University and during graduate studies at Princeton University, where she earned her Ph.D. in 2009. She has held faculty positions at Stanford University, the University of Wisconsin-Madison, and the University of California, Berkeley, and was a researcher with the American Institute of Mathematics before coming to Harvard.

Wood is no stranger to prestigious honors. In 2002, she became the first American woman to be named a Putnam Fellow after placing in the top five in the Mathematical Association of America’s William Lowell Putnam Mathematical Competition. In 2003, she received the Morgan Prize for outstanding research as an undergraduate. Five years ago, she received a National Science Foundation CAREER Award. Last year, she became the first woman in math to win the foundation’s Waterman Award.

As a number theorist, Wood is best known for her work developing probabilistic models to reveal how numeric objects will behave on average. The MacArthur Foundation noted her creative application of arithmetic statistics, an effort that investigates the statistical properties of different number systems to reveal new ways to see their fundamental properties.

MacArthur stipends are bestowed with no conditions. Wood had some early thoughts on how she’ll deploy the funds.

“Part of the way that I’m able to make progress on questions I study in number theory, even though they’re quite difficult, is that I’m bringing in ideas from other parts of mathematics,” Wood said. “I’m thinking that a good use of the fellowship would be to provide opportunities so that mathematicians from these different areas can come together and really engage with one another.” 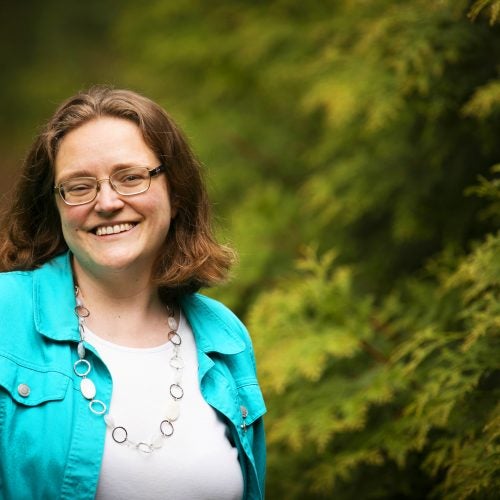