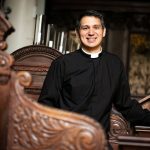 The voicemail was extremely unusual. It was from the director of the National Science Foundation (NSF), who asked Melanie Wood to call him right back.

“You get a call from your program manager every once in a while, about some grants or panels, but a call from the director of the National Science Foundation? I’ve certainly never received a call from him before,” said Wood, a professor of mathematics.

Wood, who had just emerged from a virtual department meeting, returned the missed call. NSF Director Sethuraman Panchanathan told her she was one of two recipients of this year’s Alan T. Waterman Award, the organization’s most prestigious prize for scientists under 40 in the U.S.

“I think I actually used the word gobsmacked,” Wood said. “It’s not something that anyone ever expects to win. I was just blown away, completely amazed, and just so honored.”

Wood is the seventh Harvard scientist to receive a Waterman, which the government has awarded annually since 1975, and the first woman ever to receive it in mathematics. This marks the second year in a row a Harvard scientist has won a Waterman. Last year, chemist Emily Balskus was one of the winners. Wood shares the 2021 Waterman Award with Nicholas Carnes, a social scientist and scholar of public policy at Duke University.

“It is truly a delight to recognize the outstanding talent embodied by Dr. Carnes and Dr. Wood as this year’s recipients of the Alan T. Waterman Award, the highest honor given to early-career scientists and engineers,” said Panchanathan. “Wood is tackling the mysteries and most complex problems in mathematics by looking into the connection of number theory and random matrices. Carnes is looking into how a person’s social background may influence their decision to pursue public service and what factors would increase their opportunities to serve.”

Wood is best known for her work on number theory, one of the oldest branches of mathematics that considers the properties and relationships of numbers.

“I am interested to know if we look out into the universe of different possible numerical systems, what will we see?” Wood said. “Are most numerical systems similar to the familiar ones, or quite different? To what extent do things we take for granted with whole numbers, like prime factorization, remain the same, and to what extent do they vary among different number systems?”

Her passion for mathematics developed early. She won a citywide math competition for middle schoolers in her hometown of Indianapolis in 1994, when she was in the seventh grade. She took first in the state-wide contest that same year and placed 40th at the national level. The next year, she placed 10th among American middle schoolers. She was 16 when won silver in 1998 and 1999 with the U.S. International Mathematical Olympiad team. She was the first woman to make the team.

Wood is used to being first when it comes to awards. In 2002, she was the first American female to receive the Putnam Fellow award from the Mathematical Association of America and in 2003 she received the Morgan Prize for outstanding research as an undergraduate. This also isn’t her first NSF award. In 2017, she received a National Science Foundation Career Award. A quirkier addition to her trophy case came from Dove soap, which named her a role model for young girls in 2012.

Wood is a Radcliffe Alumnae Professor at Harvard Radcliffe Institute. Among her peers and students, she is known for mentoring graduate students through research programs and encouraging undergraduates to get involved in math research.

“Within her pioneering contributions to mathematics she has the unusual ability to find projects for undergraduates interested in trying their hand at research,” said  Michael Hopkins, George Putnam Professor of Pure and Applied Mathematics and department chair. “She is an inspiration to our community in all of its facets.”

Wood said the Waterman Award will allow her research team to take on high-risk, high-reward projects that would be impossible without NSF support.

“The most exciting thing about the award research-wise is that it lets me start new projects that I don’t know if they are going to pan out,” Wood said. “This will enable me to go for the long shots. Sometimes they don’t pan out, which is why that they’re not always easy to get funded, but sometimes they do and they give us the most exciting breakthroughs.”

The award will be presented at a virtual ceremony later this month. Along with a medal, the award includes $1 million in research funding over five years.