Celebrating a half-century of equity, achievement 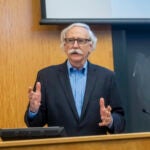 A Title IX Anniversary flag flew over Harvard Stadium this past weekend as students, alumni and fans came together to celebrate achievements in women’s athletics at the University, events that marked the start of a yearlong celebration of the passage of the transformational civil rights law in 1972.

“We were excited to use this weekend to launch our yearlong celebration of 50 years of access and opportunity for girls and women,” McDermott said. “Inviting alums back for a weekend of women’s games, while also creating space for alumnae to gather and celebrate was the focus. We simply wanted to bring people together and honor the progress made, while celebrating the young women who are now thriving as Harvard student-athletes.”

Title IX has made a sweeping impact in many areas where women and girls have fought for equity. It helped launch the modern era of women’s collegiate sports.

Sunday’s panel, held in the Science Center, was titled “Next” and focused on the professional path ahead for Harvard’s female athletes. McDermott and alums from the fields of finance, medicine, law, and entertainment spoke of the many different opportunities available to the next generation and of the professional challenges women may face relative to their male peers.

For Kendra Ragatz ’95, a panelist and a partner at San Francisco’s Acrew Capital, it was important to encourage and empower today’s student-athlete women to continue striving with enthusiasm in their post-Harvard lives.

“It’s important that we invest in other chapters of their lives, outside of just athletics,” Ragatz said. “That is what makes the University such a special place to be an athlete.”

Gabi Davidson Adams ’25, a forward on the women’s hockey team, appreciated the shared wisdom. “You don’t often get such an outstanding group of women in one room, talking about their experiences and sharing their expertise,” the Kirkland House resident said. “They all had important messages to share, even if you don’t pursue a career in the same industry.”

Maggie McCarthy ’23, also a Kirkland House resident and member of both the women’s basketball and lacrosse teams, expressed her gratitude for the strong role models who have coached her at Harvard.

“The biggest message I got from this panel, and this whole weekend, was the sense and feeling of community,” McCarthy said. “Having these alumnae who are here to support us and give us advice is such an important part of being at Harvard.”

At the huddle on Saturday, McDermott spoke of her pride in being the first woman director of athletics in the nearly 200-year history of intercollegiate athletics at Harvard.

Stephanie Morawski ’92, the Costin Family Head Coach for Harvard Women’s Swimming and Diving, is herself one of the most decorated swimmers in School history. Now in her 26th year as head coach, she spoke of the challenges of still being underrepresented as a woman in the role, and the different perspective and approach she brings because of her gender.

The weekend was a highlight of the yearlong Title IX Anniversary celebration championed by McDermott and the Athletics Department. There will be a celebration game and youth clinic for each women’s team, and a New England Sports Network documentary celebrating women’s athletics at Harvard.

“This Title IX milestone is deserving of more than one weekend or one program. Fifty years of access, opportunity, and benefits for girls and women is worthy of a full year of recognition,” McDermott said. “It also gives time to reflect on the shortcomings of that access and what we need to strive for in the future to ensure these opportunities are there for all who want them.”