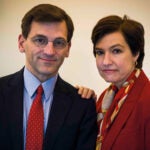 No return to Camelot

Luiz Eloy Terena left his Indigenous village in Brazil as a child, thinking he would study education or biology and return someday to help his community. He was partly right. Terena became a lawyer with doctoral degrees in social anthropology, sociology, and law, and now serves as legal adviser to the Brazilian Indigenous Peoples Association. Terena, 34, a well-known advocate for Indigenous rights in Brazil, took part in a Wednesday panel on illegal mining in the Amazon, and its effects on public health, the environment, and Indigenous rights sponsored by the David Rockefeller Center for Latin American Studies. The Gazette spoke to Terena via Zoom last week about his work, the effects of climate change, fires, deforestation, and illegal mining on the Amazon, and the challenges for Indigenous rights in Brazil. He spoke in Portuguese from Campo Grande, capital of the state of Mato Grosso do Sul.

GAZETTE: How did you decide to become a lawyer?

TERENA: I was born and raised in the village of Ipegue in Mato Grosso do Sul. At that time in my village, school was only up to fourth grade. My mother wanted us to continue our education, and the only way to do that was by leaving our village. She moved to the city of Campo Grande to work as a domestic, and we went with her. After I finished high school, I went to college. I’m part of a generation of Brazilian Indigenous youth who were able to go to college thanks to affirmation action policies promulgated by former President Lula da Silva.

My goal was always to go back to my village. I originally wanted to study education or biology, but I was influenced by my sister, who wanted to become a lawyer. When I began working on cases representing Indigenous communities and fighting for our rights, I found my calling.

GAZETTE:  You’ve been working as an Indigenous lawyer in Brazil for 10 years. What have been the gains for the Indigenous movement in that decade?

TERENA: In those years, there have been struggles, but also many accomplishments. I have represented the Terena, the Guarani-Kaiowá, the Kadiwéu, and the Kinikinau tribes in the courts, which has been a major achievement for Indigenous people. For many years in Brazil, Indigenous people were not autonomous because they were under “tutelage” of a federal agency, the National Indian Foundation. Indigenous communities with legal complaints had to be represented by that entity in the courts. It was only when the Brazilian Constitution of 1988 recognized Indigenous people as autonomous that we could represent ourselves and fight for our rights in the courts. In 2013, I represented an Indigenous community against a group of fazendeiros, or farmers, who were planning an auction to fund a private militia to “protect” their farms. We know that many of those private militias often killed Indigenous leaders who were trying to protect their ancestral lands. In a historic ruling, the courts sided with the Indigenous plaintiffs and declared that the auction was illegal.

GAZETTE: What is the state of Indigenous rights in Brazil?

TERENA: In Brazil, when we talk about Indigenous rights, we are talking about land rights. All the other rights to health, education, etc., originate from the rights to our ancestral lands. Since the time when Brazil was conquered by the Portuguese in 1511, norms to protect the rights of Indigenous peoples have existed on paper, but they have never been enforced. In the name of progress, Indigenous rights have always been violated. The 1988 Constitution reaffirmed Indigenous peoples’ original right over the land they traditionally occupied, but very little was done in real life. As of now, there are many cases of land demarcation in courts yet to be resolved. Hundreds of Indigenous communities were expelled from their lands during the military dictatorship [1964-1985] and are now in hands of agribusiness companies. Brazil is signatory of international treaties that protect Indigenous peoples’ rights, but neither the Constitution nor the treaties are respected. In the last 30 years, there has been a concerted effort to restrict Indigenous peoples’ land rights by groups tied to agribusiness and cattle and soybean producers. They argue that according to the Constitution, only lands that were occupied by Indigenous people in 1988 can be recognized as Indigenous land. We argue that the rights of Indigenous people are original and precede 1988.

GAZETTE: How big is the Indigenous population in Brazil and what are their main challenges?

TERENA:  According to the Census of 2010, there are 830,000 Indigenous people. They belong to 305 different communities, and they speak 274 languages. There are 114 groups which live in isolation, but the numbers may be higher. For us, the most urgent problem is the lack of both demarcation and protection of Indigenous territories; some lands have been demarcated, but they are not protected. Many of our lands have been invaded by garimpeiros, illegal gold miners, soy farmers, cattle breeders, and illegal loggers. The situation has worsened with the government of Jair Bolsonaro, who has shown no regard for Indigenous rights. The other big problem is racism against Indigenous people in Brazil. There are several cities in the interior of Brazil where Indigenous people are harassed, mistreated, and killed.

A positive change is that the number of Indigenous people in universities has increased due to affirmative action policies, but there are still many challenges: alcoholism, drug addiction, sexual abuse, and suicide among young people.

GAZETTE: What are the effects of climate change on the Amazon and Indigenous people’s lives?

TERENA: Indigenous peoples face the effects of climate change every day. We are called the guardians of the forest, but we can’t be expected to carry that burden just by ourselves. As Davi Kopenawa, a shaman and leader of the Yanomami people, has said, “We don’t know for how long more we can hold up the sky.” The Amazon is being threatened by climate change, but also by illegal gold mining, deforestation, illegal logging, and by the lack of demarcation of Indigenous lands.