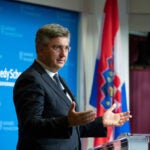 By Cat Green Davis Center for Russian and Eurasian Studies

Was 6,000 B.C. a good year for wine? Possibly, but at the present it appears only Georgia would know for sure.

Currently Italy, Spain, France, and the U.S. are the world’s biggest wine producers, but Georgia is the oldest and among the most storied. The earliest evidence of winemaking there dates back 8,000 years, and Mamuka Tsereteli, senior fellow at the Central Asia-Caucasus Institute at the American Foreign Policy Council and president of the America-Georgia Business Council, said wine has been a key part of Georgian history since.

Tsereteli, who is also an adjunct professor at American University and a longtime promoter of Georgian wines, spoke about the geography, geology, history, and cultural background of wine in the nation straddling Europe and Asia on Thursday as part of a series of inaugural events for the new Program on Georgian Studies at the Davis Center for Russian and Eurasian Studies.

“Georgian winemaking,” he said after the event, is “deeply rooted in spiritual and societal life, and in the legends and traditions of the ancient country. Nestled between the Caucasus mountains and the Black and Caspian seas, Georgia is a place where the origins of wine, the uninterrupted tradition of making wine in Qvevri, and unique varietal distinctiveness evolved into the elegance of modern-day winemaking”

Qveris are the egg-shaped, earthenware vessels still used today to make and store wines in traditional Georgian winemaking. The organic residues of early Neolithic wine were found on fragments of vessels similar in shape to Qveris at two sites in Georgia by an international group of scientists who reported their discovery in 2017.

Following Tsereteli’s lecture, Stephen Jones, director of the Program on Georgian Studies, led a Q&A on the political and economic significance of Georgian wine. “Wine plays a vital part in the Georgian economy … and is an important part of its international trade and partnerships with other states,” he said afterward.

Wine is one of Georgia’s main exports, and the nation sent a record 107 million bottles to 62 nations in 2021, a million of them to the U.S., according to government figures.

“Georgian wine is fundamental to understanding the sources of Georgian identity and cultural production — an element in Georgia’s soft power in the world today,” Jones said. “Georgian wine and food have become globally recognized in the last decade and are elements that add to the global recognition of Georgia … In other words, wine is not just about the alcohol content, it is about big money, identity, and international relations.”