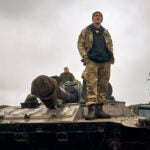 Russia’s invasion of Ukraine has resulted in a massive humanitarian crisis for that country’s people, but its impact is being felt globally as well, said Andrej Plenković, prime minister of Croatia, during a John F. Kennedy forum at the Institute of Politics on Wednesday.

Plenković addressed the ongoing war along with Croatia’s role on the world stage, as the European Union’s newest member, and also sounded warning notes about the future of democracy in the internet age during a conversation moderated by Grzegorz Ekiert, director of the Minda de Gunzburg Center for European Studies,

“Nobody remains untouched,” said Plenković. Calling Russia’s attack a “violation of international law” and an attempt at “a negation of Ukrainian identity,” he noted its tragic global repercussions in the form of widespread food crises, a damaging rise in energy prices, and the resulting destabilization of various national economies.

At the same time, said Plenković, who has been prime minister since 2016, “nobody expected such an unprecedented solidarity and mobilization of the Western community to support Ukraine.”

During the conversation, co-sponsored by the Center for Public Leadership and the Minda de Gunzburg Center for European Studies, Plenković pointed out that Croatia was the third country to recognize Ukraine. From the beginning of the invasion on Feb. 24, “We were very clear from the start that we would support them,” he said. That has included taking in more than 21,000 refugees and displaced people and contributing financial and military aid. “They are fighting not only for their freedom but for the values we all share,” he said.

The career diplomat explained how Russian President Vladmir Putin appeared to have taken full advantage of a concurrence of distracting and destabilizing events in timing his attack. “International politics still has not forgotten how the West had withdrawn from Afghanistan,” he said, a decision that suggested a desire to avoid foreign entanglements at least in the near-term. And while the invasion’s start date was safely after the conclusion of the Olympic games in Beijing, which were hosted by Russia’s ally China, it allowed Russia to take advantage of ongoing turmoil over Brexit as well as France’s focus on its divisive elections and Germany’s on the retirement of Angela Merkel after 16 years in power.

The war also came as authoritarian regimes were becoming emboldened. “Contextually, it is an interesting moment in world politics that we all have to face,” Plenković said. Naming Hungary and, increasingly, Poland as countries shifting from democracies to autocracies, Ekiert then asked Plenković about the challenges facing the EU — and whether the alliance can continue.

It is, however, facing “various economic and financial crises.” In particular, he said, the EU’s free-trade Schengen Area has been deeply impacted over the last several years. Threats posed by terrorism, the cross-Mediterranean immigration crisis, and the global COVID pandemic have all prompted countries to reinstate border checks that undermine the functioning of the special agreement, he said. These very real challenges have served as fodder for anti-EU and anti-European sentiment.

“Populist and demagogical forces are more represented than ever before,” said Plenković. “My role is to re-strengthen the mainstream, but this doesn’t mean that we should neglect our own national interests.”

It is a shift he has seen in his own country of approximately 4 million. “Since we joined the European Union, the political spectrum has altered immensely,” he said, naming “new parties of young people who didn’t contribute and are only seeing the negative side” of EU membership.

The best response, he said, is education. In a vacuum, other, louder voices can advocate for isolationism “using the technology that has altered all of our democracies.”

“Technology is dictating the dynamics of democracy, not always to the good,” he said.