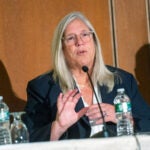 No, Jason Bourne is not the real CIA

At least for now the tide appears to be turning against Russia in its attack on Ukraine, which has recaptured wide swaths of land in recent weeks. The Ukrainian successes have spurred discussion in the West about the prospect for negotiations to end the aggression and at what cost. This week, Russian President Vladimir Putin began calling up 300,000 military reservists in the country’s first mobilization since World War II to replenish its badly depleted armed forces. Putin also said he would defend his country with nuclear weapons, if threatened by the West.

Philip Short is a former foreign correspondent in Moscow for the BBC, the Economist, and The Times of London, and author of the new book “Putin: The Man Behind the War in Ukraine.” He gave a virtual talk about Putin and Ukraine hosted by the Belfer Center’s Intelligence Project at Harvard Kennedy School Wednesday.

Short spoke to the Gazette about Putin’s escalations of the war and whether there is growing reason to worry about how he will respond if Ukraine continues to make gains. Interview has been edited for clarity and length.

SHORT: There are a number of elements which one has to bear in mind. One, and the most important, is that the war is not going well for the Russians. That may seem an obvious thing to say, but it’s the basis for everything that is happening.

Putin catastrophically miscalculated on several scores: He did not expect the Ukrainians to resist as strongly as they have done. There was never any question that he thought they were going to be welcomed with flowers. That was the kind of propaganda myth that was put around. But he didn’t expect them to rise up as a nation and oppose the Russians. He didn’t expect Zelensky to remain in Kyiv and lead the resistance. And he miscalculated terribly over the capacities of the Russian army and how extremely poorly it has performed in military terms. So, it’s not going well.

Is it a disaster? Not yet. One has to be very cautious about evaluating this because it is an ongoing situation. But clearly, they just don’t have enough troops on the ground to do what he wanted to do, so he’s had to escalate. This is a significant escalation, but he’s doing it pretty cautiously. He’d much rather avoid any mobilization at all because it risks fomenting discontent among the Russian population. He’d much rather that the war continued, or the fighting continued, as something far away which wasn’t really affecting most Russians daily lives. But that’s no longer possible. And now, we really are going into uncharted waters because it’s not at all clear that this partial mobilization will be sufficient.

If you look back at the last 20 years of Putin’s time in power, this is the first time he’s taken a major initiative that has gone seriously wrong, so there’s nothing really to guide us in how, in the end, he’s going to react. My instinct is that he will continue to escalate until he reaches a position where he’s sure he can present whatever the result is as an acceptable outcome for him. But we’ve never been in this situation with Putin or Russia before so, we don’t know how it’s going to play out.

GAZETTE: Should the U.S. and the West take advantage of this moment as it helps Ukraine put maximum pressure on Russia to end the war militarily? Or is that potentially too risky, and would it be better to seize this time to stabilize the situation through negotiations?

SHORT: I don’t actually see a contradiction between the two. The more that the Ukrainians can push the Russians back, the stronger their negotiating position will be. Eventually, all wars end either with complete defeat, in other words in a Ukrainian flag flying over the Kremlin, and that is not going to happen, or with negotiations. In this case, we’re looking at negotiations. And it was Emmanuel Macron, the French president, who said, “Geography is stubborn.” Well, it’s true. Ukraine is not going to physically move anywhere, and nor is Russia. They are going to continue to be neighbors, and eventually, they are going to have to find a way to live together. So, negotiations, yes.

On this business of pushing Russia back, one has to be very careful about or very much aware of Crimea. It’s possible to push Russia back perhaps. If the Russian army really continues to underperform, and the West continues to arm the Ukrainians, and the Ukrainians continue to fight very fiercely, it’s possible to imagine pushing the Russians back to where they were before Feb. 24. I don’t believe it’s possible to push them out of Crimea. That I think would be a casus belli. Then kind of all bets would be off about how the Russians might react. Although Zelensky says we can push them out completely, and that’s very understandable in morale terms for the Ukrainians, it ain’t going to happen, at least not as far as Crimea is concerned.

GAZETTE: If Putin starts to feel as if he is losing the upper hand in the war or losing face at home, are people right to worry how he might react?

SHORT: He’s not reckless. He’s normally very cautious in what he does. And I think this “partial mobilization,” rather than a full-scale mobilization, is an example of that caution, a kind of an incremental approach. He’s not going to lash out totally unpredictably. That is something I don’t think is going to happen. The problem is, he is being pushed into a corner and if that continues, it’s very difficult to say, “He won’t do this” or “He won’t do that.” Because if he feels that his own position is threatened — which is not the case at the moment — or if he feels that Russia as a nation, Russia as a whole, is at a very serious disadvantage, then I don’t think you can completely rule out anything. When I say “anything,” I don’t see this leading to World War III. But the use of battlefield nuclear weapons if it gets to a really difficult state for the Russians? I don’t think you can rule that out. It could happen.

GAZETTE: What indicators will you be watching for to gauge what Russia’s game plan may be as winter approaches?

SHORT: On the Western side, it’s a question of how Europe manages to survive the winter. There are already fault lines you can see in NATO and the EU about how to react, what the long-term plans should be in Ukraine. But the fault lines have been very much kept under control for now. So that’s Europe. There’s the United States: What’s going to happen in the midterms? What is the buildup going to be to the presidential election in 2024? It’s not that far away. All those things on our side are going to be absolutely critical. On the Russian side, I think we are going to need to watch very carefully how public opinion reacts to this partial mobilization. And finally, what it all in the end depends on is the situation on the battlefield.