How to liberate African art 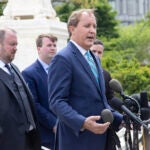 ‘Life of the mother’ is suddenly vulnerable

Many museums find themselves in a complicated period of transition as they confront their entanglements with colonialism. That complex project was the subject of a recent Harvard Center for African Studies workshop on the future of Africa-based curatorial practice hosted at the Harvard Art Museums.

“This is a unique time, when questions about restitution, reparation, and collection-sharing of African historical art and artifacts globally, and on the state of curatorial practice on the continent, are being interrogated alongside a booming contemporary art scene that has the promise to reshape narratives about Africa through African voices and perspectives,” Emmanuel K. Akyeampong, the Oppenheimer Faculty Director at the Harvard University Center for African Studies, said as he kicked off the event.

Akyeampong, who also serves as the Ellen Gurney Professor of History and of African and African American Studies, said that there’s a growing call for a “continent-wide dialogue around the visual arts, archiving, curatorial practice, conceptual strategies, art criticism, cultural heritage protection, and more.” The workshop was hosted by the Harvard Center for African Studies and co-sponsored by the Harvard Art Museums, the Peabody Museum of Archaeology and Ethnology, and the Cooper Gallery of African and African American Art.

Ciraj Rassool, a senior professor of history at South Africa’s University of the Western Cape, and Koyo Kouoh, executive director and chief curator of Zeitz Museum of Contemporary Art Africa, spoke about the impact of colonial legacies and restitution on Africa-based curation. Rassool works in Africa and Europe, teaching museum and heritage and curatorial studies. He also teaches at TheMuseumsLab, an enrichment program that includes 25 African and 25 European curators working together in Germany and South Africa.

Rassool began his address by posing questions about the ways anthropology has evolved, and discussing how museums have been marked by colonialism. He made a pointed distinction between the museum as a holder of art, showing where the individual belongs in the world, and the museum as “the mechanism to do social intervention.”

The museum world finds itself transitioning from the former to the latter as curators and scholars re-evaluate colonial legacies and the field of anthropology, Rassool said.

Traditional definitions of anthropology and ethnography have diverged in recent years, Rassool said. The distinction lies between people whose material culture can be seen in museums and those “without history, who are deemed to be in a state of stasis, never changing.”

“What we call ethnography, nowadays, mainly refers to a form of research that is fine-grained, detailed, and based on fieldwork,” he said. “It’s something that comes out of a colonial history. But anthropology is not that any longer in certain parts of the world. It’s remade itself. You have multiple anthropologies existing all over the world, in different universities, in different societies.”

These distinctions are “under stress” in societies that experienced anti-colonial freedom movements in the 1950s and 1960s, Rassool said. In Africa, anthropology “is the discipline of African colonization. African people should not have to see themselves through the lens of the anthropologist.”

Museums around the world must also contend with the repatriation of human remains taken by European colonizers. In Germany, for example, repatriation programs will return 980 skeletons to Rwanda.

However, younger curators believe that decolonization efforts don’t go far enough, Rassool said, citing the practice of adding small side notes to exhibits. The professor urged the importance of confronting the full legacy of colonization.

“We need to look forward to an era of collaboration as part of restitution,” he added.