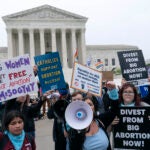 The war in Ukraine has tested the entire European Union, but it has raised particular challenges for Ireland, which has remained officially neutral in military conflicts since the 1930s. On Friday, during a discussion at the Minda de Gunzburg Center for European Studies, Simon Coveney, Ireland’s minister for foreign affairs and minister of defense, predicted that the Russian invasion will likely bring about a shift in attitude in the island nation.

Ofrit Liviatan, the event’s moderator, began the midday event by asking Coveney about how Ireland historically has viewed its neutrality. Coveney explained that it has meant that the country does not belong to any collective defense pact, although it has joined various peacekeeping missions. This stance, which has been encoded in Ireland’s Constitution, guarantees a certain independence. “Neutrality means Ireland decides when we get involved and when we don’t,” said Coveney. In this war, however, “Ireland is not neutral.”

The difference, he explained, is the “extreme brutality” of the Russian invasion. Recently back from Bucha, Ukraine, the minister spoke movingly about the atrocities perpetuated by Russian troops in this village outside Kyiv. Recalling “the raw emotion of standing over a mass grave” where 503 bodies had been recovered, he acknowledged that “those numbers will end up being a very small microcosm of the suffering and brutality.”

“This is a blatant breach of international law and of the UN charter,” he said. “There is no justification for what is happening in Ukraine.”

Going forward, he opined, “This war is changing the debate in Ireland.” In the future, he added, “I think the Irish people will be more open to collective approaches to security.” Ireland has so far refrained from sending military equipment to Ukraine, but it has sent non-lethal supplies, such as medical equipment and humanitarian aid.

A shift on security will entail a reallocation of funds as well as change in policy. Currently, Ireland spends about 0.3 percent of its GDP on defense, which Coveney described as “roughly a quarter to a half of what other similar-sized countries in Europe spend. “We’re a complete outlier in what we spend on defense,” he said. “I don’t believe that’s sustainable in the future.”

Serendipitously, Ireland has recently completed a 13-month budget reassessment, culminating in what the minister called a “strong report on increasing investment in defense.”

The EU as a whole faces different challenges. To start with, the partnership has never had a united foreign policy. “It’s not the United States of Europe,” Coveney explained. In addition, he pointed out, while U.K. and U.S. intelligence both warned of the invasion, the EU was taken by surprise. “The perceived wisdom of the EU was that this wouldn’t happen. It couldn’t happen on this scale,” he said.

“Neutrality means Ireland decides when we get involved and when we don’t.”
— Simon Coveney, Ireland’s minister for foreign affairs

While noting the EU’s relatively quick and coordinated response, Coveney also stressed the difficulty of the road ahead. At its heart is a conundrum: “The more successful Ukraine is militarily, the more aggressive Russia may become,” he said. “The more aggressive Russia may become, the more difficult it is for Ukraine. This isn’t a conventional war in that there isn’t a line of sight of what could end it.”

In its response, he said, “Europe is trying to get the balance right: supporting Ukraine while at the same time not letting the war spread beyond the borders. That’s not easy. In the short term, we have to focus on the battlefield, but we also have to negotiate an end of the conflict that doesn’t sell out Ukraine.”

The Biden administration has “by and large got this right,” said Coveney. “They’re trying to intervene and get that balance.” Ireland, he added, “is in the same space.”

About to assume a leadership role in the Council of Europe, Ireland recently announced a €3 million fund to investigate war crimes and is pushing for more sanctions. Noting that Ireland is much less dependent on Russian fossil fuels, he acknowledged that the rest of Europe will pay a price for such sanctions. Nevertheless, “Ireland is pushing for a maximalist approach,” he said. “We believe the higher the cost, the more likely we’ll see Russia deciding on a change of course toward negotiations rather than brutality. The point of sanctions is that they hurt hard now — that there’s a real cost to this conflict.”

Liviatan, a Government Department lecturer on law and government, followed up discussion of Ukraine by asking about Brexit and its impact on the upcoming elections — and on the Good Friday Agreement, which turns 25 next year.

Prefacing his comments by noting that the war “does put the challenges we face in Ireland into context,” Coveney acknowledged that Brexit has complicated relations between the U.K. and Ireland, especially the still-fragile peace negotiated by the Good Friday Agreement. “The U.K. is leaving the EU. Northern Ireland is part of the U.K., and we respect that,” he said. “From the day the British people decided to leave the EU we started thinking about how do we protect the peace process?”

The British decision to go with a “hard Brexit” only complicated the negotiations, as it threatened what has become known as the Northern Ireland Protocol — a compromise that would eliminate border checks between Northern Ireland and Ireland, which remains part of the EU.

The problem, he explained, is bigger than trade. “Politics in Northern Ireland are driven for many by identity and ideology, by ‘green’ vs. ‘orange.’ We need to figure a way through that. We need a partnership approach between the British government and the EU, and, to be honest, we haven’t had that.”

Looking ahead to the May 5 elections, Coveney said he did not expect a “sea change.”

“The majority of people in Northern Ireland are in favor of the protocol. They want more flexibility in how it’s applied, but they’re in favor of it,” he said.

“What we need to get to is a compromise that moves things forward. We need to be working together as a continent, from a trade perspective and from a security perspective,” he said. Referring to Brexit as “a pebble in the shoe,” he concluded: “In the context of what we’re facing in Ukraine, we have to get our act together. We have bigger problems to face.”