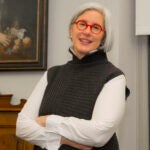 Susan Cain prefers to poke around the less-examined corners of can-do America. In 2012 she published “Quiet: The Power of Introverts in a World That Can’t Stop Talking,” which became a phenomenon and made the congenitally less chatty among us fashionable and even cool. The 1993 Harvard Law School graduate’s new book, “Bittersweet: How Sorrow and Longing Can Make Us Whole,” has become a New York Times bestseller. The Gazette spoke with Cain about how embracing the poignancy of life can lead to creativity and connection. The interview was edited for clarity and length.

GAZETTE: What does it mean to have a “bittersweet” state of mind?

CAIN: It has to do with the awareness that life is a mix of joy and sorrow, light and dark, and that everything and everyone you love is impermanent. I first experienced this state of mind when I would listen to sad music. All my life I had this mysterious reaction to sad music; it would make me feel a sense of connection to the people who had known the sorrow that the musician was trying to express. At first, I thought it was just me, but when I started my research, I realized that many musicologists have been studying this because for a long time many people have had this reaction not only to music, but to other aspects of the human experience. There is a deep tradition across the world and across the centuries of people experiencing this higher state of mind that comes from an awareness of fragility and impermanence.

GAZETTE: You make a connection between this state of mind and religion. Can you talk about that a bit?

CAIN: We listen to sad music for the same reason we go to church or synagogue or the mosque. We long for the Garden of Eden, we long for Mecca, we long for Zion because we come into this world with the sense that there is a more perfect and beautiful world to which we belong, where we are no longer. We feel that intensely, but we’re not really encouraged to articulate that. Yet our religions do it for us. Art also does it. In “The Wizard of Oz,” Dorothy longs for a place “somewhere over the rainbow,” and Harry Potter longs to see his parents again. This is a fundamental building block of every human experience. That’s what the music is expressing, and that’s why we listen to it, and that’s why we feel so connected to each other when we do it because this is our most primary state of being. But because we all have to earn a living, raise our children, and live our lives, we’re not so much in touch with those deeper states. Arts and music have a way of bringing us back.

GAZETTE: Many people would find that having a positive outlook in life is fine. What’s wrong with that?

CAIN: There are two things wrong with it. Number one is that it’s just not telling the truth of any human experience because there’s no human being who doesn’t experience both joy and sorrow, and light and dark. That’s just part of human life. To tell each other that we shouldn’t be telling the truth of our experiences is inherently invalidating. But the deeper reason is that there is something about the melancholic side of our experience that is intimately connected to creativity and to transcendence. We shouldn’t want to be robbing ourselves of this experience.

In the book, I developed a bittersweet quiz, with psychologists Dr. Scott Barry Kaufman and Dr. David Yaden, that people can take to measure how likely they are to experience bittersweet states of being. Dr. Kaufman and Dr. Yaden ran some preliminary studies and found that people who score high on the quiz, meaning that they tend to experience bittersweet states of mind, are also more inclined to states that predispose them to creativity, awe, wonder, spirituality, and transcendence. These are some of the most sublime aspects of being human, and they happen to be connected to our appreciation of how fragile life can be, and the impermanence of life. 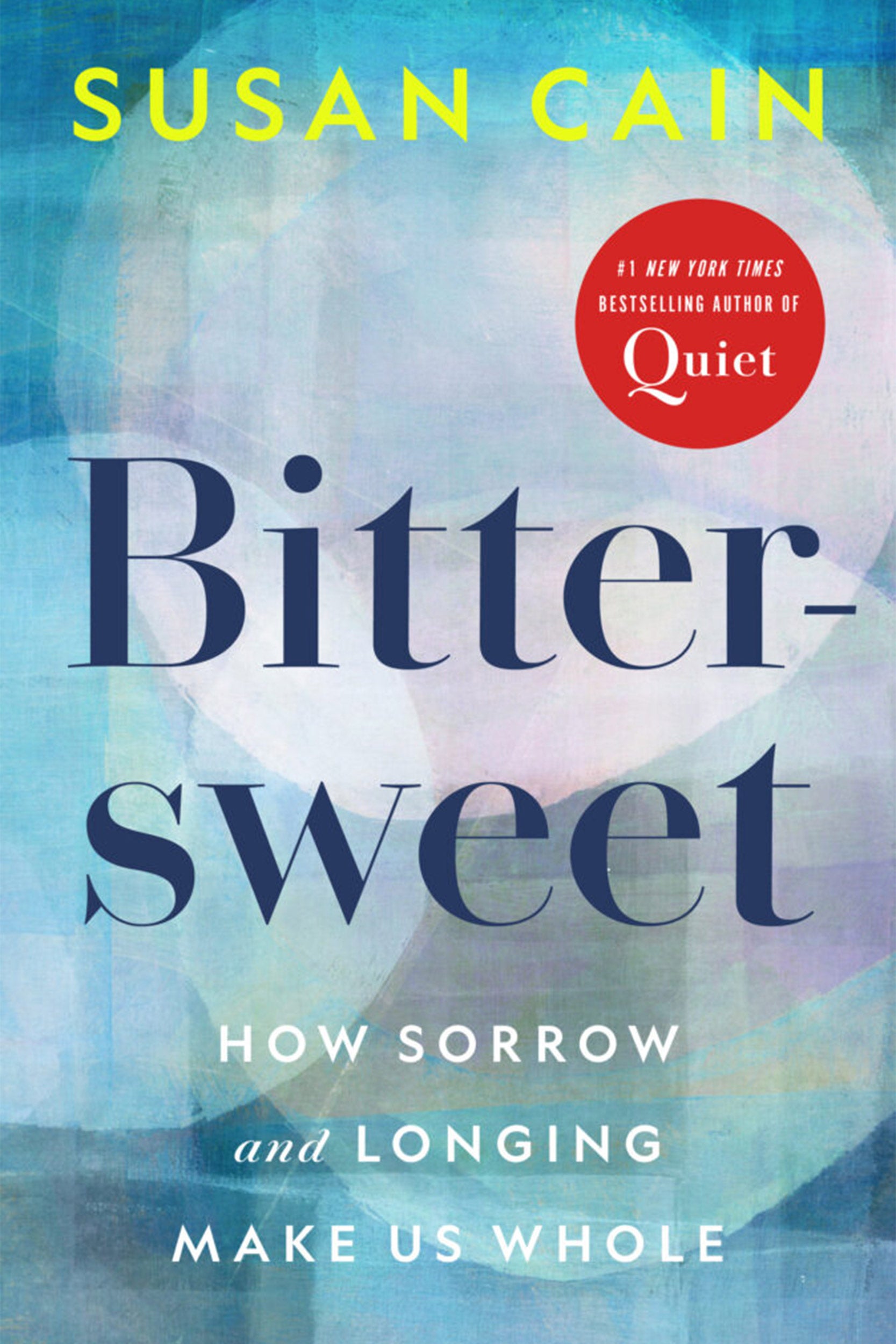 GAZETTE: Why does sadness get a bad rap in American culture?

CAIN: The U.S. culture since the 19th century has been organized around the idea of winners and losers. This way of thinking originated in the economic sphere, where we started asking, “If somebody succeeded or failed in business, was that a question of good luck or bad luck?” Or “Was it something inside the person that made them have that outcome?” Increasingly, the answer that people arrived at was that it was driven by something within the person, and we started having this dichotomy of seeing each other as winners and losers. The more you have that kind of dichotomy, the more you want to behave in a way that indicates that you’re a winner and not a loser. Anything that would be associated with loss, like sorrow, longing, sadness, or melancholia, would be seen as being part of the loser side of the ledger.

Being a winner was associated with being successful and cheerful. Even back in the 19th century, the psychologist William James commented on how it was becoming unfashionable for people to complain about the weather because it was seen as being too negative. During the Great Depression, a common view was to see those who lost everything as losers. In my research, I found a news article with the headline: “Loser Committed Suicide in the Streets.” That is astonishing if you think about it, but the use of the word loser has only increased over time.

I would also say that religion has played a role. The U.S. was originally a Calvinist country, and in the Calvinist religion, you were predestined for heaven or hell. There was nothing you could do about it, but you could show that you were one of the people who was going to heaven. The way to do it was by working hard, and then that thinking got transferred later in the 19th century into: “Are you a winner or a loser?”

GAZETTE: Why should people embrace the bittersweet aspects of life? What’s in for them?

CAIN: The first thing I would say is to look at the data, which is quite overwhelming. Psychologist Laura Carstensen at Stanford University did some fascinating studies where she showed that people who are attuned to what she calls life’s fragility — the fact that our days are numbered — also tend to find a sense of meaning in their lives and have a greater sense of gratitude; they are more focused on their deeper relationships, and they’re less likely to feel angry and irritable.

There’s also the work by David Yaden, who found that people who are in transitional states of life, including divorce and approaching the end of their lives, also tend to reach those states of mind that Laura Carstensen was talking about. We saw it collectively in the United States after 9/11, when many people turned in the direction of meaning. We saw a huge increase in applications for Teach For America and to take jobs as firefighters, nurses, or teachers. We’re seeing that now in the wake of the pandemic, with more applications to medical and nursing schools and people wanting more meaning from their work and personal lives.

GAZETTE: You wrote about the power of introverts in “Quiet.” This book is about the strength of embracing a bittersweet outlook on life. Why are you drawn to these underrated aspects of humanity?

CAIN: I think that both these aspects of humanity are connected. I also think there’s something about writing books that gives us the permission to discuss things that aren’t as easy to talk about in everyday life. To me, the whole point of writing books is to look at the unexamined, the unspeakable, and the unarticulated. I’m just most interested in talking about that which can’t be said when we’re just chatting at the grocery store.

GAZETTE: What do you hope people will take away from this book?

CAIN: I would like people to be less afraid of experiencing melancholy, sorrow, and longing, and to embrace the powers that bittersweetness has to offer: the powers of creativity, connection, and transcendence. It has been very interesting for me to see the response from readers of “Bittersweet,” which is a very different book from “Quiet.” But the letters I’m getting from readers of “Bittersweet” are very similar to the ones that I got from those who read “Quiet” in that what people say over and over is, “I feel understood,” “I had never been able to give voice to it,” “I feel validated.” A lot of people write me saying that after reading the book they’re realizing that they have suppressed the melancholic side of their nature all their lives, and they’re also realizing how valuable that side of their nature is. There has been this curious echo with “Quiet,” which I didn’t set out to do, but it ended up happening.