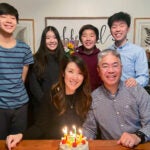 Aubree Muse was playing for the Harvard softball team and was halfway through the spring season of her sophomore year when she felt excruciating pain in her lower back and tingling in her legs. She saw a spine specialist, who found a tumor in one of her lumbar vertebrae. Within days, her life changed forever.

Undergoing spine surgery to remove the tumor meant the athletic recruit from Rineyville, Kentucky, would have to quit softball, a sport she had played since age 4. Muse found support in her family and her teammates.

“The girls on the team helped me and lifted me through that time and reminded me that softball was something I did, but it wasn’t who I am,” said Muse, who played as an outfielder and appeared in 19 games as a first-year. “You’re so much more than the activities you’re involved in, which was vital for me to realize at that point in my life.”

It was one of the most memorable lessons Muse took away from her time at Harvard, a period of change and hard-won growth. She graduated in December with a concentration in environmental science and public policy and a secondary in art, film, and visual studies.

Muse had come to Harvard as a pre-med student but fell in love with environmental studies after taking a class on climate change with Daniel P. Schrag, Sturgis Hooper Professor of Geology, professor of environmental science and engineering. The class, said Muse, led her to a new calling.

“I was certain I was going to be a doctor,” said Muse. “I took a class with Professor Schrag about how we can deal with climate change and how our energy system is going to have to change and adapt. After the class, I was like, ‘Wow, this is going to be a major problem for my generation,’ and I realized this is what I want to spend my life working on.”

Muse ended up writing an undergraduate honors thesis on the topic of electric utility destabilization, using the California Camp Fire and Pacific Gas & Electric bankruptcy as a case study. Schrag was her thesis adviser.

Caused by a faulty electric transmission line owned and operated by Pacific Gas & Electric, the 2018 blaze was the most destructive wildfire in the state’s history and one of the world’s costliest natural disasters. Schrag advised Muse to study the case as an example of how society could prepare for climate change and investigate whether there should be policies to discourage people from living in forests, coastal areas, and other places that can be affected by current and future shifts in the environment. He was impressed by Muse’s final work.

“Aubree dug into this, and she learned all the details of politics, economics, liability laws, and policy in California,” said Schrag, who is also director of Harvard University Center for the Environment. “She learned exactly what happened with PG&E, and she put together a story about what happened and what it means that was far better than anything I could ever have imagined doing on my own. Frankly, it’s one of the best pieces of work I’ve seen from an undergraduate in 25 years at Harvard.”

Schrag, who became Muse’s mentor, was also impressed by her maturity and toughness when she had to abandon competitive sports. “I think many people who were at her level of athletic ability would find that incredibly difficult, and it would shake them in every aspect of their lives,” he said. “Aubree pivoted, focused on her academics, and never looked back.”

At Harvard, Muse also connected with a part of her culture she hadn’t explored while growing up in her hometown. Muse identifies herself as Kānaka Maoli, which is the traditional name of the Hawaiian people. Muse’s grandmother was a Native Hawaiian who moved to Kentucky with her husband, a military man. Muse was close to her grandmother, but the older woman passed away when Muse was still in high school and before she really had a chance to learn more about her Indigenous roots. Much of Muse’s childhood was spent at softball tournaments in Kentucky and nearby states and around the family’s cattle farm, which her father runs when he is not working at his office job in the automotive industry.

Through the Harvard University Native American Program, which offers a community for Native American and Indigenous people, including natives of Alaska and Hawaii, Muse met other students who helped her discover her roots.

“HUNAP became such a big part of my Harvard experience,” said Muse. “It was a place where I could connect with other students who were also looking for that stronger cultural connection. I had always wanted to be closely connected with my culture, and HUNAP also gave some of my very best friends.”

Now back in Kentucky, Muse splits her time between Rineyville and Lexington, where she works remotely for a San Francisco company that develops utility-scale solar power projects. In Rineyville she still lends a hand around the cattle farm, helping her dad deliver hay, fix fences, and feed baby calves — her favorite chore. Overall, she enjoys being close to her family and living among pasture lands and scenic rolling hills, all of which she missed when she was in Cambridge.

Looking back at her time at Harvard, Muse said it was rich in experiences and lessons. She has made peace with having to quit softball and relishes being healthy and active, working out, and hiking with friends. Surprisingly, she says that her time in softball prepared her for what was to come and taught her the value of resilience.

“Softball has been referenced as a game of failure,” Muse said. “You fail seven times out of 10, and if you have an average of .300, you’re great. When you enter the field, you know you’re going to fail, but you can’t let that affect you. You still have to do the best you can. There are so many ways in which you can fail. You have to learn how to fail with grace.”