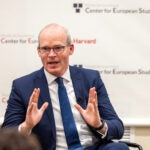 A new report on pandemic learning loss found that high-poverty schools both spent more weeks in remote instruction during 2020-21 and suffered large losses in achievement when they did so. Districts that remained largely in-person, however, lost relatively little ground. Experts predict the results will foreshadow a widening in measures of the nation’s racial and economic achievement gap.

The report was a joint effort of the Center for Education Policy Research at Harvard University, the National Center for Analysis of Longitudinal Data in Education Research at the American Institutes for Research, and NWEA, a nonprofit research and educational services provider. It analyzed achievement data from 2.1 million students in 10,000 schools across 49 states and is the first in a series that will be tracking the impact of catch-up efforts over the next two years.

The Gazette spoke with economist Thomas Kane, Walter H. Gale Professor of Education and Economics at Harvard Graduate School of Education and center faculty director, about the findings. The interview was edited for length and clarity.

GAZETTE:  What is the magnitude of students’ learning loss due to the pandemic? Which school districts have been the most affected?

KANE: We found that districts that spent more weeks in remote instruction lost more ground than districts that returned to in-person instruction sooner. Anyone who has been teaching by Zoom would not be surprised by that. The striking and important finding was that remote instruction had much more negative impacts in high-poverty schools. High-poverty schools were more likely to go remote and their students lost more when they did so. Both mattered, but the latter effect mattered more. To give you a sense of the magnitude: In high-poverty schools that were remote for more than half of 2021, the loss was about half of a school year’s worth of typical achievement growth.

GAZETTE: What is the percentage of students who have experienced learning loss in the U.S.?

GAZETTE: Are we at risk of losing the educational gains of the last three decades? How could this impact the racial achievement gap?

KANE: Over the last 30 years, there has been like a gradual closing in both the Black-white and Hispanic-white achievement gaps. The federal government has been administering an assessment to a nationally representative sample every couple of years, the National Assessment of Educational Progress. Gaps have been narrowing for the last 30 years.

The latest assessment was conducted between January and March of 2022. Our results imply that when those results come out later this year (likely in October, before the midterm election) there will be a decline nationally, especially in states where schools remained remote, and gaps will widen sharply for the first time in a generation. What we should be focused on now is ensuring that the widening gaps do not become permanent. By helping students catch up over the next few years, I hope we can reduce the gaps again when the next NAEP assessment is collected in 2024.

Interestingly, gaps in math achievement by race and school poverty did not widen in school districts in states such as Texas and Florida and elsewhere that remained largely in-person. Where schools remained in-person, gaps did not widen. Where schools shifted to remote learning, gaps widened sharply. Shifting to remote instruction was like turning a switch on a critical piece of our social infrastructure that we had taken for granted. Our findings imply that public schools truly are the “balance wheel of the social machinery,” as Horace Mann would say.

“Interestingly, gaps in math achievement by race and school poverty did not widen in school districts in states such as Texas and Florida and elsewhere that remained largely in-person.”

KANE: Some observers are going to say that we are too focused on the decline in test scores. However, given past relationships between test scores and other life outcomes, we would expect the achievement declines to translate into lower high school graduation rates (since students may not have the math or reading skills required for upper-level courses), lower college-going rates, and lower earnings. Recall that not every group of students saw the same decline — high-poverty schools were more likely to go remote and suffered larger losses when they did so. To be more concrete, students in high-poverty schools that were remote for more than half of 2020-21 would be expected to see a 5 percent decline in average earnings over their career, given past relationships between test scores and earnings. That may not sound like much, but when calculating losses for all 50 million students in K-12 education in the U.S., it would amount to a $2 trillion decline in lifetime earnings. It’s in that context that the $190 billion that the federal government has provided in supplemental aid for schools since the pandemic began sounds like a good investment, if it could be used to reduce the losses.

GAZETTE: What should school districts and states do to help students recover from their learning losses?

KANE: School districts need to start by assessing the magnitude of their losses and then assembling a package of interventions that is commensurate with their losses. Districts that remained remote during 2020-21 — especially the higher-poverty schools in those districts — lost the most ground and will need to spend more of their federal aid on academic recovery. It’s all about magnitudes. From prior to the pandemic, we have estimates of the impact of interventions such as high-dosage tutoring or summer school or double periods of math instruction. Each district should start this summer by taking the estimates of the impact of each of those interventions, multiply each by the share of students they plan to serve under each and make sure the sum of expected effects adds up to the size of the loss their students have suffered. That’s going to be an eye-opening calculation for most districts, since most districts I see are planning intensive interventions for 10 or 15 percent of their students, some voluntary summer school — and that’s about it. A barely-more-than-normal recovery effort such as that is going to be nowhere near enough in many districts.

Here’s an example. The students in high-poverty schools that were remote for most of 2020-21 lost about 0.45 standard deviations in math. There are very few educational interventions that have ever been shown to have an impact that large. One example is high-dosage tutoring — which involves tutoring sessions two to three times per week in groups of one to four students with a trained tutor all year. Pre-pandemic research implied that such a program would generate about 0.38 standard deviations. In other words, a district could provide a high-quality tutor to every single one of the students in a high-poverty school and still not expect to make up the decline. Of course, given the inevitable problems of maintaining quality while scaling up such interventions, the expected impacts from pre-pandemic research are likely to be over-optimistic. But districts need to start with a plan, which is commensurate with their losses and then scale up or scale down as necessary over the next couple of years.

GAZETTE:  The federal government gave $190 billion to schools across the country for academic recovery. Is that enough?

KANE:  Based on our estimates, those dollars would be enough if school districts, especially the high-poverty school districts that were remote for much of 2021, were to spend nearly all of it on academic recovery. Unfortunately, a lot of those funds have been going to things that weren’t necessarily related to academic recovery. That’s why we’re trying to sound the alarm now before those dollars are committed to other things.

School districts have never been through a disruption of this magnitude before. School districts have until the end of 2024 to spend the federal aid for academic recovery. Most of the district plans I have seen are undersized. Of course, districts will eventually learn that their efforts are not sufficient. However, the great danger is that they will realize that too late — after they have committed the federal aid.

You wouldn’t try to patch a hole without making sure that the patch was as big as the hole. Very few school districts have done the math to figure out if the effect sizes of the interventions that they’re planning and the share of students to be served by each match the loss their students have endured. Troublingly, there’s nothing about the federal process that requires that district plans are commensurate with their losses, even on paper.

It’s worse than that. The American Rescue Plan — passed in March 2021, before the magnitude of the losses were clear — only requires districts to spend 20 percent of the federal aid on academic recovery. Most districts seem to be following the federal guidance, and spending between 20 and 30 percent on academic recovery. That’s not going to be nearly enough in the lower-income districts that spent much of 2020-21 in remote instruction. Local business leaders, parents, and school boards need to engage with their school districts and make sure that the district recovery plans are commensurate with the losses. If not, these achievement losses will become permanent.