Snatching a culture back from state-sanctioned violence 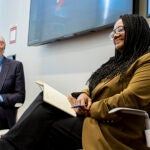 Harvard Scholar at Risk works to save artifacts, archives of Manipur’s Indigenous people

In Manipur, the region of India in which Binalakshmi Nepram was born, Indigenous people have lived 60 years under an Armed Forces Special Powers Act that gives state soldiers broad authority to arrest, search, and shoot to kill.

Throughout her childhood, Nepram saw violence against her native community. Military patrolled the streets and entered homes without warning; sudden lockdowns kept children from attending school; Indigenous residents were sexually assaulted, killed, or “disappeared” by soldiers with impunity.

The violence was not just physical and emotional, it was cultural, too. Books were destroyed and heritage sites were vandalized. Nepram remembers being fined if she spoke her Indigenous language in school.

“We thought, at the time, that all this was normal,” she said. “I even thought the war, the conflict, was normal.”

Nepram, now a Harvard Library Fellow through Harvard’s Scholars at Risk Program, has spent the past 15 years fighting against oppression of the nearly 50 million Indigenous people in Manipur and other northeast regions of India. In 2004, she formed the Manipur Women Gun Survivors Network to support families of state-sanctioned gun violence and help them seek justice, and began researching and collecting her people’s artifacts and archives, hoping to preserve the history the Indian government was trying to erase.

Nepram and her organization began to attract international attention, and Nepram was awarded the Sean MacBride Peace Prize in 2010 and the CNN IBN Real Heroes Award and Ashoka Social Innovators Fellowship a year later.

As the organization grew, though, so did fears of retaliation. In 2011, the son of a government official in Manipur shot and killed a local boy in a road rage incident. When the Gun Survivors Network tried to help the boy’s mother pursue legal action, the government official started threatening them. Nepram was advised to leave the country by her lawyer, who feared for her safety. She left three days later and has not returned to Manipur since.

Nepram has spent the last several years in the U.S., continuing her work to document and preserve the Indigenous culture of Manipur. For the past year, as a Harvard Scholar at Risk, she has worked with Harvard librarians to assess and strengthen their collections related to her culture.

“Manipur was an Indigenous nation that was chipped away at, century after century. Our narratives were completely, deliberately wiped out.”
— Binalakshmi Nepram

“I knew there was so much rich literature out there that isn’t part of what’s taught in the narrative of India,” Nepram said. “I wanted to see if there was anything on my region in Harvard’s archives, find the missing links on Manipur and Indigeneity, and hope the library would allow me the opportunity to tell them where the treasures are.”

During her fellowship, she’s worked with librarians at Widener Library, Tozzer Library, and Houghton Library. For Tozzer Librarian Susan Gilman, working with Nepram has been “very inspiring and rewarding.”

“I’ve learned so much about Bina’s region of the world and the incredible people who live there,” Gilman said. “Watching her fight to ensure that her people are not erased from global narratives makes me think about what other voices have been lost or are in danger of being lost.”

Manipur and other northeast regions of India have been colonized twice, Nepram said. In the 1800s, when Manipur came under British control, the British and local Hindu rulers began destroying Indigenous religious scriptures and archives detailing their way of life. Then, in 1947, India was recognized as a single country whose leaders insisted the Indigenous history of Manipur wasn’t the “real” history of India.

“Manipur was an Indigenous nation that was chipped away at, century after century,” Nepram said. “Our narratives were completely, deliberately wiped out.”

The erasure has been so successful that some Indians of the majority ethnicity don’t consider people who look like Nepram to be “Indian.” When she was a college student in Delhi, Nepram said, she was sometimes asked what country she was from — an experience familiar to many people from her region.

She blames the government for this, adding, “I feel sorry for my fellow Indians who don’t know anything about us and our history.”

Nepram learned about her Indigenous ancestry from a young age. Her grandfather followed the Indigenous Sanamahi faith — though he was ostracized for it, he gave up the Hindu faith after seeing Hindu priests’ exploitation of his people. Throughout Nepram’s childhood, her grandfather would share the oral histories of Manipur’s Indigenous tribes, counting on the next generation to preserve the stories.

Today, “His stories remain in my consciousness,” Nepram said, but she wants to ensure they are documented elsewhere. She sees Harvard’s archives as the ideal place for records and artifacts of her people.

“If they’re brought here, they’ll be safe,” she said.

In her library fellowship this year, Nepram began by surveying collections to get a sense of the materials they hold related to Manipur. Based on what she found — and didn’t find — she put together lists for suggested collection development. Her ideas include not just books, but items such textiles woven by Indigenous women and posters protesting violence.

“Bina has helped us figure out which materials in our collections are most critical to digitize and make available,” Gilman said. “She has also helped us figure out what contemporary works are missing from our collections, which helps us incorporate more Indigenous voices. It would be fantastic to continue this kind of work with other Indigenous scholars from different regions of the world.”

As she neared the end of her fellowship last month, Nepram delivered the George Parker Winship Lecture at Houghton Library.

“It was the first-ever public talk on this archiving, and the poster of the talk was going viral at home in Manipur,” she said. “It was such a historic moment for our people.”

Though Nepram’s research has been dedicated to preservation of her own culture, she knows there are many Indigenous groups that have faced similar oppression and erasure.

“I’m asking, how do we rectify those missing narratives?” she said. “Every culture is special, and I want every culture to thrive, because cultures teach each other new things.”

Her next research project will focus on the pre-colonial confederation of Iroquois Confederacy of North America, which Nepram said has similarities to the 12th-century Constitution of Manipur. She plans to study the two and compare them — both forms of government, she noted, are precursors to the philosophy of the modern United Nations.

“I’m of the firm belief we need to look back at some of these good practices,” she said. “There’s a culture of coexistence among Indigenous peoples that I feel we’ve forgotten in the making of the modern world. I think Indigeneity can bring a lot of lost wisdom that will help us find peace.”