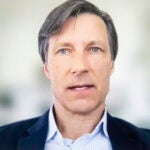 The son of an African American police officer and an Irish American schoolteacher, Justin Morrow said growing up Cleveland, a city deeply divided along racial lines, made him feel as if he “never really fit in.”

Eventually he found a sense of place on the soccer field, but even there, things were fraught. Morrow remembers regular verbal and nonverbal slights and insults he received on and off the pitch. When he excelled on his largely white, Catholic high school’s soccer team, those insults turned violent.

“I received death threats,” said Morrow. “They didn’t want me to succeed because I was Black.”

Morrow said he encountered “structural racism every day” through a career as a standout in college and in Major League Soccer for 12 seasons. The experience inspired him to co-found Black Players for Change (BPC) in 2020, a coalition of more than 170 players, coaches, and staff members of MLS dedicated to promoting diversity and equality in soccer and beyond.

Now Morrow is at Harvard building on that work.

A fellow at the Weatherhead Center for International Affairs’ Global Sports Initiative, which is part of the Weatherhead Initiative on Global History, he’s spending the calendar year connecting with Harvard experts, analyzing historic and contemporary social movements and athlete activism, and interviewing a range of athletes pushing for change. His goal: Take the lessons of BPC global.

“I am at Harvard to understand what it takes to grow an organization, what it takes to turn a movement into real transformation and real actionable change,” said Morrow, a longtime defender for Toronto F.C. who made a number of appearances for the U.S. men’s national soccer team. His goal is to unite under one umbrella the efforts of athletes in the U.S. and abroad pressing for reform. “A lot of us are fighting in the same arenas, just on different paths to the field. If we can come together, I think it’ll be much more powerful. And I think Harvard is going to help me understand that.”

Morrow has already had success bringing players together around a cause. Prior to the kickoff of the four-day MLS is Back Tournament in July 2020, he helped organize more than 100 Black players and members of BPC who lined the field for a silent demonstration lasting 8 minutes and 46 seconds, the length of time prosecutors said white police officer Derek Chauvin knelt on George Floyd’s neck, killing him.

Since then, the group has collaborated closely with MLS officials on issues of diversity, inclusion, and representation, from building mini pitches in low-income neighborhoods to introduce kids with fewer resources to the sport, to crafting inclusive policies for MLS Academies, the league’s feeder system for elite teen players.

The group has also worked closely with the players from the NFL, NBA, and National Women’s Soccer League on a range of issues. Together they have promoted education and awareness campaigns around diversity and inclusion during Black History Month; donated to nonprofits that support voting rights; and advocated for criminal justice reform legislation at the federal, state, and local levels. At the league level they have shared best practices around social justice reforms.

Morrow said MLS modeled its own community-policing program after the Miami Heat’s initiative that facilitates conversations between players, police, and residents of neighboring communities. BPC received the MLS Humanitarian of the Year award in 2020. Morrow was honored with the same award a year later.

The Weatherhead Center has long been interested in exploring how sports can help transform society. In the past several years it has led a number of sports-related conferences and events and sponsored the work of New Orleans Saints safety Malcolm Jenkins, a co-founder of the NFL Players Coalition and an advocate for criminal justice reform. As the center’s first fellow in 2020, Jenkins studied the Tulsa Race Massacre as representative of the dispossession of Black wealth.

“We realized that, with Harvard’s incredible resources, we could give athletes an opportunity to expand the work they were already doing with an emphasis on research,” said Steve Ortega, a Weatherhead associate who helped develop the fellowship. “We felt they could take this research they do at Harvard and then bring it to the world.”

Over the past several weeks, Morrow has been developing a team of faculty advisers, including Cornell William Brooks, Hauser Professor of the Practice of Nonprofit Organizations and Professor of the Practice of Public Leadership and Social Justice at Harvard Kennedy School, and former president and CEO of the NAACP, and Marshall Ganz, the Rita T. Hauser Senior Lecturer in Leadership Organizing, and Civil Society at HKS, who worked with César Chávez to unionize California farmworkers in the 1960s.

Morrow said their experience fighting for social justice and civil rights will “contribute so much to the success of my project.”

A first step on the road to that success for Morrow involves finding ways to increase diversity in coaching and management roles in professional sports. “Every league in the world is facing a deficit of Black representation in the coaching and executive levels, and if we combine forces, we can confront this issue with more efficacy” said Morrow, who just stepped down as co-director of BPC and currently works in player development for his former club Toronto FC.

“Professor Ganz always talks about a shared story and identity and a community,” Morrow added. “And I think for me, that’s really what it is. We are professional athletes, and no matter what sport you play, that is a very small community. I think it’s about realizing our own power and the things that we can achieve together.”